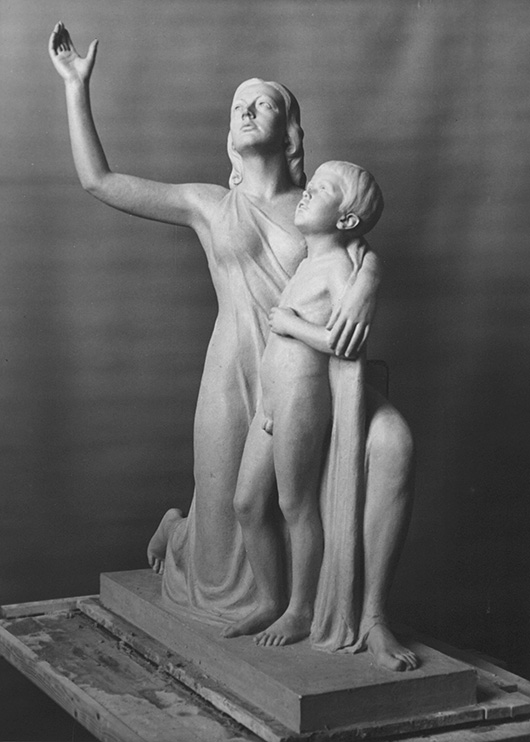 The monument on the family grave of city physician Aarno Reponen was completed by the summer of 1939. Sculptor Eemil Halonen had begun to prepare a draft version for the funeral sculpture a couple of years earlier on the basis of a discussion with Ragni Reponen.

In the summer of 1937, Eemil Halonen wrote to Ragni Reponen and asked if ‘your late husband’s grave sculpture still remains to be done”. Halonen said that he had completed a draft version of a sculpture that he believed would be a “beautiful funerary statue”.

Not too long after that Halonen sent Ragni Reponen a photograph of the draft and ‘a small hasty sketch of the burial monument as a whole’. In this connection, he described the piece as depicting ‘the liberation of the soul from the veils of matter, removing the veil from the face, to see the brilliance of light’.

The draft was most likely for a different piece than the one that was ultimately chosen. Eemil Halonen’s description could suit, for example, the funerary sculpture Rukous (Prayer) for forester Yrjö Raunio or Huntu (Veil) on the grave of commercial counsellor Heikki Peura. In any case, Halonen prepared two drafts for Ragni Reponen. He namely pointed out to her in 1939: ‘I shall possibly use the first draft version that I suggested to you for some other work’.

Reponen‘s funerary sculpture was delayed for one reason or another, although Eemil Halonen even intended to visit Savonlinna in the summer 1937 to see the grave site and thus make it easier to design the artwork. The photograph from February 1939 was of the work ‘already partly cast in bronze, though not yet finished’.

At this point, the choice of the gravestone posed problems. Ragni Reponen hoped to have black granite, but it would not be available until the ‘distant future’. The alternative was a less costly of black rock from Kuru, of which Halonen had no experience. He recommended the most inexpensive red granite from Vehmaa, which would stand out ‘among the many black gravestones’.

Ragni Reponen found it hard to give up the idea of black granite from Hyvinkää, but she finally chose red Vehmaa granite because of availability. She had doubts about its durability and demanded a five-year guarantee from the stoneworks in case of cracks or splitting. According to Halonen, red Vehmaa granite had been used for gravestones for only some twenty years, but it had showed no signs of weaknesses. ‘I believe that this stone, too, will last for thousands of years’.

The client wanted the work to be unique, an eternal monument dedicated to a greatly missed dearly departed one. Ragni Reponen, for example, wanted Eemil Halonen to assure her in writing that he would not make ‘this image or something that even resembles it’ for anyone else. Eemil Halonen, in turn, pointed to his own artistic licence and copyright to his work:

I do not intend to make another image similar to this funerary statue, but I cannot promise that some other work might not resemble it in some way, for usually all the works of a single artist resemble each other in some way, so that one can conclude from a piece with some certainty by whom it was made.

The monument was completed in the early summer of 1939. According to art historian Liisa Lindgren, its theme is invocation. A kneeling female figure and the little boy in her arms have raised their gaze up on high as in an appeal or a prayer. Inscribed on the lower part of the gravestone is the first sentence from John 11:25: ‘I am the resurrection and the life’, with Jesus’ words continuing ‘…he that believeth in me, though he were dead, yet shall he live’.

Ragni Reponen appears to have been very satisfied with the burial sculpture and Eemil Halonen had a miniature version of it cast in bronze for her. After the unveiling of the monument, Reponen warmly thanked the sculptor and his wife. Mrs Alli Halonen wrote Ragni Reponen a letter in which she, as the spouse of the artist, also described her husband’s vision as a maker of funerary sculpture:

You know that I am deeply interested in my husband’s life’s work. It is a fact that it is a great fortune to have such work, such thoughts. Creating a work of art like that which addresses eternal values must leave a mark on one’s surroundings, one must in the midst of worldly everyday matters raise one’s gaze again and again from the ground to great and unknown eternity, to the great light and source of strength to invoke help from there.

I would particularly be happy if this sculpture would bring light into the grief in which you must now be cloaked as you miss your dear departed one. 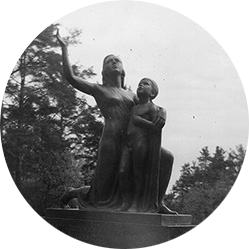 Aarno Reponen (1897–1935) became the city physician of Savonlinna in 1927. His wife Ragni Reponen (née Nyman) also had the degree of Licentiate of Medicine.