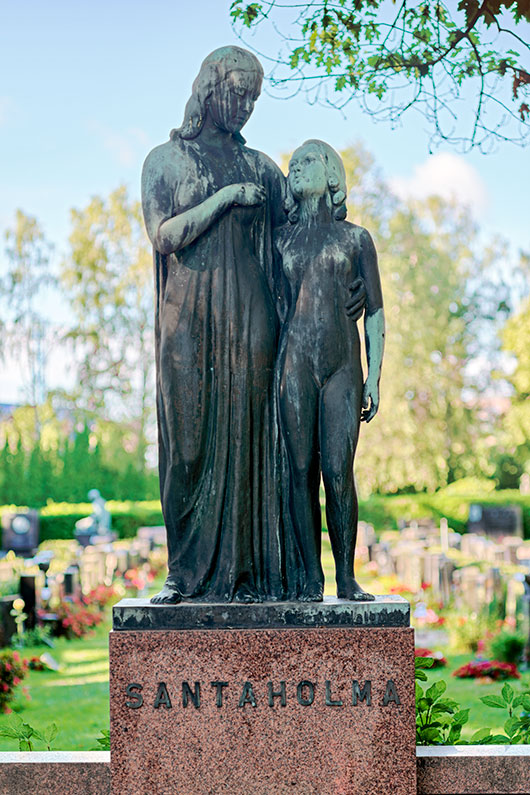 The sculpture Johdatus (Providence) by Eemil Halonen is on the Santaholma grave in Hietaniemi cemetery in Helsinki. It depicts two women, most likely a mother and her daughter. The older and taller female figure is cloaked, while the younger woman is nude. The women are looking at each other. The older woman’s right hand is on her left breast, on her heart, and she is holding the younger female close to her with her left arm. According to art historian Liisa Lindgren, the figures can be interpreted as a variant of the angel leading the soul, or in theosophical terms as a guide and adept, a master of esoteric knowledge. The gravestones are of reddish granite. 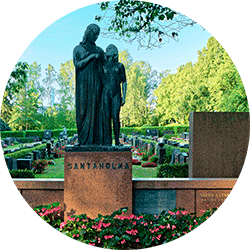 Engineer Antti Kustavi Santaholma (1873–1922) was the director of the A. Santahoma lumber company of Oulu and one of the leading businessmen of North Finland. In the 1860s, his father, farmer Antti Santaholma (1840–1918) had begun to purchase grain, butter, potash and tar and sell hides, salt and iron, partly with sailing vessels that he owned. Together with his five sons, Antti Santaholma senior established the A. Santaholma family-owned company in 1903. It owned a sawmill at Kalajoki and acquired a groundwood plant at Pyhäjoki in 1905 and a sawmill at Haukipudas in 1915.

Santaholma exported dark-hued granite from Kalajoki to England and Scotland from 1890 until the First Word War. At first, the stone was exported in unworked large pieces. The Santaholma stone-cutting and grinding works operated from 1903 until 1917 but in its last stages only on the domestic market. Granite from Kalajoki was regarded as one of Finland’s finest types of rock for monuments. When polished, it acquired a strong sheen and a deep, restrained colour. The cemetery of Newcastle, for example, is known to have hundreds of gravestones made from Kalajoki granite. Granite from Kalajoki was sold as ’Russian granite’ in Scotland, and despite their efforts the Santaholmas were not able to change the name.

Antti Santaholma junior was born at Kalajoki, attended the Klassillinen lyseo secondary school in Oulu and matriculated in 1892. He studied at the Polytechnic Institute in Helsinki, graduating as an engineer in 1896. Santaholma also studied the lumber trade on stays abroad and commissioned the construction of new factory buildings and steamships. He established a steam-powered sawmill and stone-grinding plant at Kalajaoki and Northern Finland’s first groundwood plant at Pyhäjoki, where he served as its technical director until 1920, when he moved to Oulu to the head office of the firm, working there until his death.