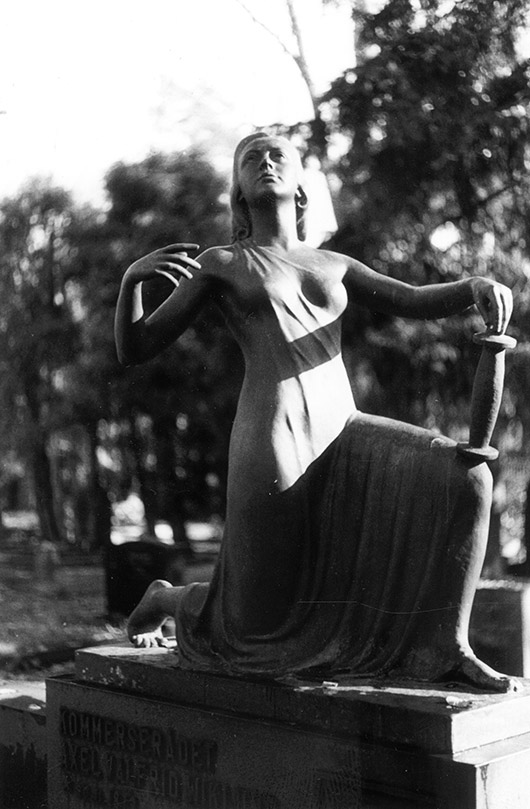 Kohtalon lanka (The Thread of Fate)

The sculpture Kohtalon lanka (The Thread of Fate) by Eemil Halonen is on the grave of Counsellor Axel Wiklund and his wife Anna Lovisa Ingeborg Laquist. The plaster version of this work was completed in 1939, a year before the death of Wiklund, but the war years prevented the completion of the bronze funerary monument.

The Thread of Fate sculpture and the accompanying gravestones were commissioned by Consul Kurt Wiklund, Axel Wiklund’s son. The work was scheduled to be completed in the spring of 1945, but politically motivated strikes at the stoneworks delayed the completion of the gravestones until the end of the year. Marked inflation also posed problems. Consul Wiklund initially refused to pay the costs incurred by Eemil Halonen, because the sharp drop in the value of money during the war years had raised the costs of completing the artwork.

As described by art historian Liisa Lindgren, the female figure of the sculpture with her upright pose has raised her gaze, arrested as if before an inner vision. As proposed by the client, the figure is holding a distaff symbolizing the thread of life and the continuity of life even after death. According to Lindgren, the sculpture is a modern version of the Fate of Antiquity.

In Greek mythology, the Fates, or Moirai, were three immortal women whose task it was to spin, preserve and cut the thread of life of people. The Fate holding the distaff is Clotho, who spins the thread of life. There are also Fates in Scandinavian mythology, which also interested Eemil Halonen. The Nornas of the North were female beings who determined the fate of mortals and the length of their thread of life.

Commercial Counsellor Axel Wiklund was one of Finland’s leading hardware entrepreneurs in the last stages of the Autonomous Grand Duchy of Finland within the Russian Empire and the early years of independent Finland. He was also active in organizations in his own field both in Finland and elsewhere in the Nordic countries. Wiklund was born in North Karelia, the son of a master builder. The family moved to the Viipuri region in the late 1870s.

After matriculating from secondary school, Axel Wiklund began his studies at the Department of Architecture of the Polytechnic Institute in Helsinki. He did not, however, complete his studies, as he was offered a small building-supplies firm in Turku in 1895. A few years later, Wiklund went into business under his own trade name and changed his firm into a joint-stock company, Oy Wiklund Ab.

Axel Wiklund moved his business to a central location near Market Square in Turku and gradually expanded into sporting and household goods. The company was also an important wholesaler, supplying hardware goods and building supplies to the countryside. In 1917, Wiklund acquired his competitors in Turku. During the interwar years Oy Wiklund Ab was the largest hardware and household goods firm in Turku and the company was one of the largest in its sector in all Finland. In the 1920s, Wiklund expanded to include automobiles in its business activities. After the death of Counsellor Wiklund, the company was acquired by the SOK Cooperatives in 1958.

Counsellor Axel Wiklund was the managing director of his company until 1918, after which he became the chairman of its board. He was also active in municipal politics, serving on the Turku City  Treasury Board for a total of 23 years. Wiklund was also one of the founders of the Lauste home for boys, a care facility for boys who had been orphaned in the Finnish Civil War of 1918. He was the owner of Hannula Manor in Askainen and interested in horse breeding. Wiklund was also the chairman of the board of the Turku Music Society.