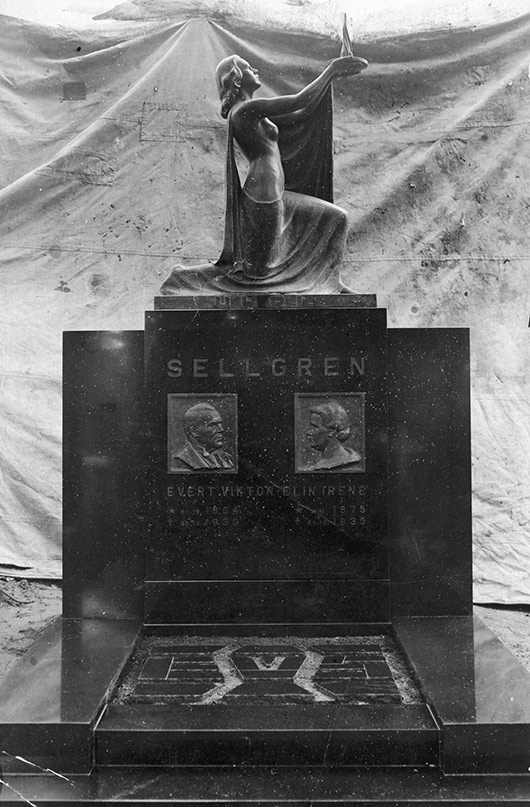 The executors of the will of Commercial Counsellor E. V. Sellgren and Elin Sellgren commissioned a work of art for their grave from sculptor Eemil Halonen to honour the couple’s patriotic life’s work. Uhri (Sacrifice), cast in bronze, was unveiled on 4 October 1938 at Ristimäki Cemetery in Viipuri. The cemetery was no longer used in the Soviet Period, and most of the gravestones were damaged or destroyed. The Sellgrens’ memorial is not known to have survived.

The gravestone was of polished black granite from Hyvinkää. Placed on top of it was a female figure raising a flame of sacrifice in her hands with one leg in a kneeling position and the other leg bent before her. On the front of the gravestone were bronze reliefs by Eemil Halonen of Sellgren and his wife. When designing the monument, Eemil Halonen asked for an expert opinion from architect Uno Ullberg (1879 – 1944), whose main body of work was in Viipuri.

The symbolism of the sculpture clearly referred to the Sellgrens’ work on behalf their locality and country and their unselfish spirit of civic sacrifice. Mayor Bertil Brunou of Viipuri pointed out that the statue would also inspire a spirit of sacrifice among future generations and remind them of fine and unselfish human activities.

Eemil Halonen made the portrait reliefs from photographs, which was typical of funerary reliefs. He asked for the use of as many photographs as possible of the Sellgrens and also gave detailed instructions on photographing an existing sculpted portrait of Mrs Elin Sellgren. Writing to Eemil Halonen on 23 June 1938, Sakari Penttinen, the manager of the Sellgren estate, described his first impression of the portraits in a politely perplexed tone. He regarded the portrait of Counsellor Sellgren to be ‘highly successful’, but he could not find in the image of Mrs Sellgren ‘the aspect of the mind’s eye that would have given me the same impression as when looking at the counsellor’. Eemil Halonen defended his work in a reply dated 25 June 1938:

Recent photographs of Mrs Sellgren were so poor that I did not dare to make changes based on them to my previous portrait of her, except for the coiffure. I quite understand that it does not show the effects of old age which you saw during her last years, and therefore there may be something in it that you may find to be strange. I found it best, however, to make her face according to the sculpted portrait, which I know to be a correct representation of her, albeit from her earlier years, than to start to change it with the aid of unclear photographs of poor quality. 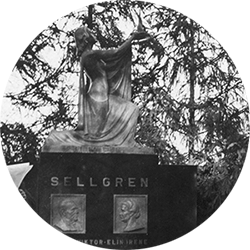 Commercial Counsellor Evert Viktor Sellgren was a leading businessman and influential local figure in Viipuri and the owner and director of the Itä-Suomen Rakennusaineiden kauppa building and hardware supplies firm (later known as Itä-Suomen Rautakauppa) from the early 1890s until his death. He also established a cement casting works, a brickworks and a sawmill in Viipuri.

E. V. Sellgren had a pro-Finnish attitude and was very active in community and social matters. His interests ranged from industry and the economy to the arts, educational activities and nature. He was a member of the Pamaus club of industrialists and businessmen of Viipuri and for several years the chairman of the Viipuri Town Council, the Church Council of the Finnish Evangelical-Lutheran Congregation of Viipuri and the Viipuri Chamber of Commerce.

The pro-Finnish Sellgren also supported the Jaeger movement, which sent young men to Germany for military training, and the Viipuri White Guard in the Civil War. The Sellgrens’ art nouveau-style villa on Venäjänsaari Island in Viipurinlahti Bay was one of the bases of the local White Guard. E. V. Sellgren was also a member of the Civil Guards and his wife Elin was for several years the head of the local chapter of the Lotta Svärd women’s national defence auxiliary.

The Sellgrens were involved in charitable activities and they were patrons of the arts in Viipuri, along with making significant donations to the Viipuri School of Economics, the University of Turku, the Kalevala Society and the Itsenäisyyden liitto patriotic association. They commissioned from Eemil Halonen at least the marble portrait of Mrs Elin Sellgren, which was made in 1909.