The bronze relief Uhri (Offering) from 1925 is on the family grave of sculptor Eemil Halonen. The same work was already placed on the gravestone of Alli Halonen’s sister, teacher Anni Leinonen in the cemetery of Siilinjärvi. The motif symbolises a strong calling.

Eemil Halonen was a convinced theosophist and the relief can be interpreted as reflecting his dedication to his work, seeking truth through art and the artist’s aim of gradually developing as a person towards revelation. He maintained this attitude throughout his life. Already as a young man, he wrote as follows to his cousin Lyyti Halonen in the autumn of 1894: ‘And our only real duty is to try to develop our spirit so that we may make progress in the second stage of development.’

In the 1920s, Halonen worked on a relief named Selfishness alongside Sacrifice. These works can be regarded as opposites. Selfishness focuses on worldly matters, while Sacrifice offers its own life to higher forces. According to Eemil Halonen, it has been the fate of artists ‘to seek beauty and truth, trying to express it to others for whom this is not their life’s work’. In 1919, Pekka Ervast (1875 –1934),a pioneer of the Finnish theosophical movement, described Eemil Halonen’s work in the following terms:

– Yes, his art, too, is new proof of how close theosophy and real art are to each other. Eemil Halonen aims at the truth in his art – and this is the alpha and omega of art – but he is not content with superficial truth, with the probability that lures so many seekers of the truth. He aims at the core of truth, to the spirit and life that lie deep under the surface. 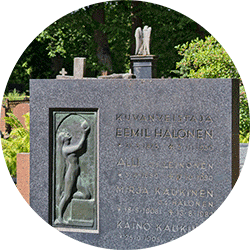 The creative artistic career of Eemil Halonen (1875–1950) lasted for more than half a century, developing over the decades from earthy national romanticism to symbolist classicism. Encouraged by his cousin, painter Pekka Halonen (1865–1933), Eemil, who came from a poor rural family in Lapinlahti and had attended a school of carpentry, undertook a career in the arts.

Eemil Halonen was one of Finland’s first sculptors with an art education who came from a rural background. He supported himself and his family, and in hard times even the 13-member family of childhood home, with his own work in art. Fluent in languages, Halonen was no less at home in the international art circles of France and Italy as he was in the cowshed and on the fields of his own farm. His own family and the familiar old men and women of his village provided him with models for realistic depictions of folk characters. In his studio he also sculpted portraits of many of Finland’s leading national figures: merchants, businessmen, artists, professors and politicians – from the patron of the arts Juho Lallukka to President K. J. Ståhlberg, folk poetry collector Elias Lönnrot, author Minna Canth, Professor Ernst Nevanlinna and composer Jean Sibelius.

In his work, Eemil Halonen was a practical and systematic creative professional. Together with his brother Arttu Halonen (1885 –1965), he was a pioneer of casting artworks in Finland. Eemil Halonen revived traditional wood sculpture in Finland and was a pioneer of Finnish sculpture in granite. Along with many solo exhibitions of his work, he participated in public sculpture projects and competitions for invited entrants. He wanted to improve the standing of professional artists and was active in many art organizations, including the Association of Finnish Sculptors, in which he served as chairman. Many public committees, foundations and statue projects also benefited from Halonen’s expertise.

Eemil Halonen (1875–1950) married Alli Leinonen (1889 –1980) in 1908. Her life’s work consisted of indefatigable support for her husband in his creative work. The couple had no biological children of their own, but they raised Alli Leinonen’s relative Mirja Leinonen (1908 –1942) like their own daughter officially adopting her in the 1940s. The five children of Mirja and her husband, pediatrician Kaino Kaukinen (1905–1989) were very dear to Eemil and Alli Halonen. The grandchildren often posed for their grandfather’s works.