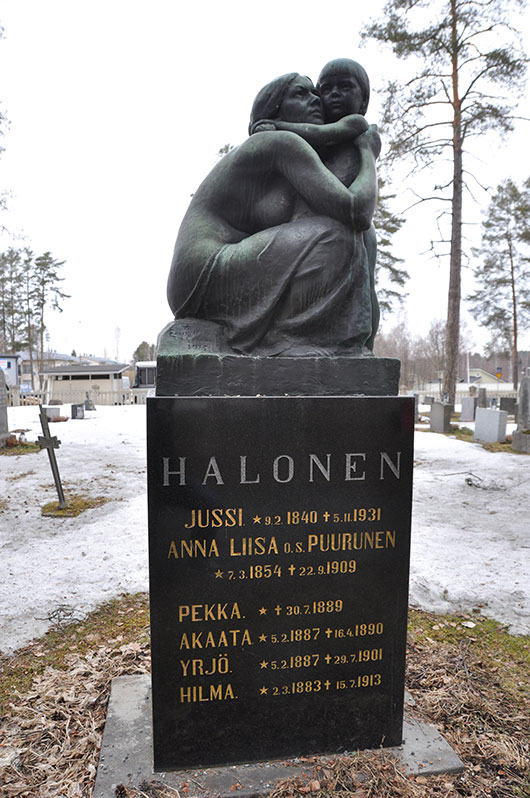 Eemil Halonen’s sculpture Äiti ja lapsi (Mother and Child) is on the family grave of his parents, Jussi Halonen and Anna-Liisa Puurunen. The work is also known as Motherly Love.

Two later cast replicas of the piece have been made. They are in front of the Haapaniemi day-care centre in Kuopio and in the Riistavesi community service centre.

Eemil Halonen was born in 1875 on the Halonen family’s old farm at Linnansalmi in Lapinlahti. His father Jussi Halonen (1840–1931) and his mother Anna-Liisa Puurunen (1854–1909) were progressive farmers, who also appreciated culture and learning. The mother read the Kalevala epic to the children and the family subscribed to a Finnish-language newspaper. The Halonens were active in founding a primary school in the locality and they also appreciated national educational pursuits.

Thirteen children were born into the family, three of whom died before reaching the age of fifteen. Eemil Halonen was the eldest son and he had close relations with his parents.

After completing carpentry school and his studies in art, Eemil Halonen returned to Lapinlahti for several years. In 1903, he bought a farm property called Uudispiha in the village of Nerkoo and invited his childhood family to live there. They grew grain and raised cattle together. Five years later, Eemil Halonen bought back the old family farm at Linnansalmi.

Eemil Halonen liked to depict members of his family, often using them as his models. He made sculpted portraits of, among other relatives and family members, his mother (1909) and father (1913).