In the Abodes of the Blessed

Einar Alarik Haapala was one of Finland’s first bicycle manufacturers, who established a factory for assembling radio receivers and bicycles in Helsinki in 1928. After his death in 1940, the firm was headed by his wife Hanna Haapala for over 20 years. It was subsequently acquired by a foundation owned by the Helsinki School of Economics and the Oulu Commercial College. In 1963, the E. A. Haapala bicycle factory and wholesale firm was sold to become a subsidiary of the Kesko retail conglomerate and the factory was moved to Turku in the following year. In 1985, the Tunturipyörä bicycle company bought the majority of the shares in Haapala from Kesko and  ten years later the Haapala bicycle factory company was merged with Tunturipyörä. 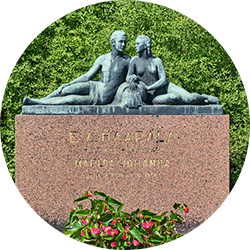 In the Abodes of the Blessed

Autuaitten asunnoilla (In the Abodes of the Blessed), a work of sculpture by Eemil Halonen, stands on the grave of director E. A. Haapala and his wife Matilda Johanna (known as Hanna, 1891 –1961). It was made in 1941, after the death of Einar Haapala. The piece was cast in bronze at the foundry of Arttu Halonen, the artist’s brother, in Lapinlahti.

The title may be a reference to hymn no. 626 (in the hymnal of the Evangelical-Lutheran Church of Finland), and in particular to its first verse, freely translated as follows:

There in the abodes of heaven
blessed by God,
no weeping or grief,
but joy eternal.
O, would I get there
from this world of sorrows.

The original devotional poem by Simo Korpela (1863–1936) is from 1893. It describes the bliss of heaven in contrast to worldly hardships and sorrows. It was published in 1900 in a collection of religious songs and hymns and was set to a tune composed by A. P. Berggren of Denmark. In the hymnal of 1938, it is a choral composed by Leevi Madetoja (1887 –1947) and published as a choir piece 1914. Like Eemil Halonen, Leevi Madetoja was interested in the theosophical world view.