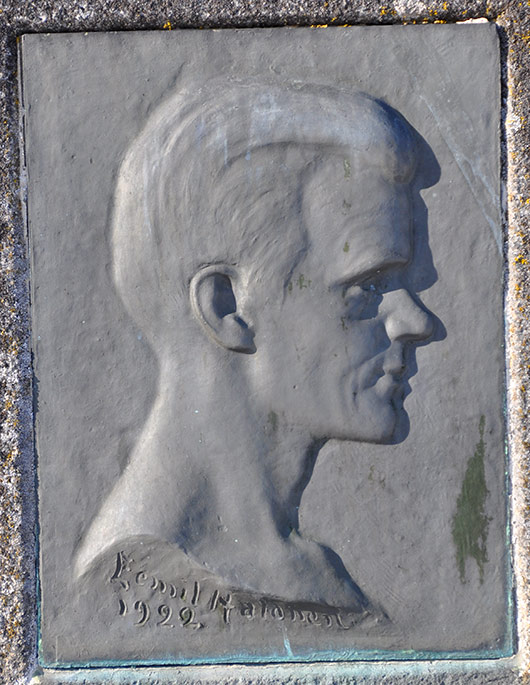 Eemil Halonen’s monument for the grave of Kauppis-Heikki was unveiled at celebration of the League of North Savo Rural Youth Associations at Pentecost 1922, on the 60th anniversary of Kauppis-Heikki’s birth. Several thousand people had gathered at the cemetery of Iisalmi. From North Savo himself, Eemil Halonen was a natural choice for making the monument, for had already sculpted a portrait of Kauppinen in 1919.

On the grave there is light-grey naturally shaped piece of granite with a bronze relief of Kauppinen on the front. The relief was described as ’very soulful and successful’. The monument cost 15,000 marks and the money was collected by the rural youth activists of the region. The movement had already donated to Kauppinen, who was ill, a home near Lapinlahti Church where he could spend his old age. 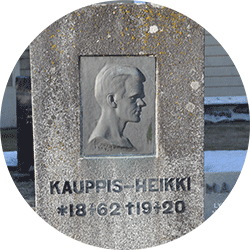 Halosten Museosäätiöor Heikki Kauppinen (1862–1920) was a self-taught folk author from Iisalmi, who depicted the people of North Savo, the nature of the region, everyday life in the countryside and the rural poor of the turn of the 19th and 20th centuries. The illegitimate son of the widow of a farm owner, he rose from the bottom level of society to become a primary school teacher. His main works were the novels Kirottua työtä (Damned Work, 1891) and Laara (1893). Kauppis-Heikki was skilled in depicting human nature and fates.

After the death of his mother, Heikki Kauppinen was employed as a 15-year-old hired hand at the parsonage of Pastor Theodor Brofeldt at Vieremä in the Parish of Iisalmi. Heikki came to know the pastor’s  sons, Pekka, Kalle and Juhani, who had literary gifts and began to guide Heikki’s interests in writing. Heikki particularly became friends with the author Juhani Brofeldt (Aho) who encouraged him to write. Kauppis-Heikki’s first short story Äidin kuoltua (After Mother’s Death) was published in 1884 in the journal Valvoja.

The author Minna Canth also encouraged Heikki Kauppinen to write and gave him a job as an assistant in her shop in 1885. In the following year, Pekka and Juhani Brofeldt persuaded Heikki to join them in Jyväskylä to edit the newspaper Keski-Suomi. During the autumn, Heikki attended lectures at the Jyväskylä Teacher Training Seminar.

During the summer of 1887, Kauppis-Heikki worked as a reporter in the newspaper Savo in Kuopio and in the autumn he began work as an itinerant teacher in Iisalmi. Around the same time, he published his first novel. After completing an itinerant teacher course, Heikki Kauppinen was appointed to a permanent position as an itinerant teacher in Iisalmi. Five years later, he became a teacher at the Kehvo Correctional Institution in Kuopio. Heikki Kauppinen completed the primary-school teacher degree privately and in 1908 he was appointed to the position of teacher at the Ulmala primary school in the parish of Iisalmi.

Heikki Kauppinen was active in local politics and the rural youth movement of North Savo. His literary career continued until 1915.