The grave of Minister of the Interior Heikki Ritavuori – Potrait relief 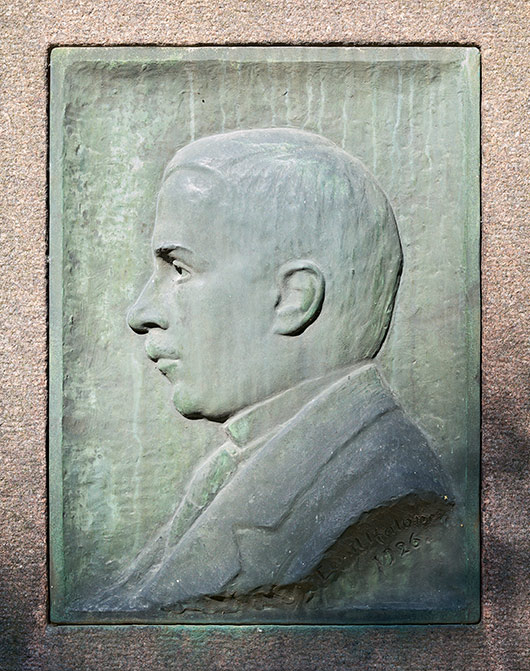 Known as an active supporter of the Young Finnish Party, Eemil Halonen was a natural choice for making the grave monument of Minister Heikki Ritavuori. In 1921, he had made a portrait of President K. J. Ståhlberg, who, like Ritavuori, had a political background in the National Progress Party. Halonen and Ritavuori also knew one another. Ritavuori had been the assistant director of the Suomi insurance company, when its new building, with a façade sculpture by Halonen, was completed in 1911.

The funerary monument of Minister Heikki Ritavuori was unveiled at the Hietaniemi cemetery in Helsinki on 24 October 1926. It consists of a red-granite gravestone of three parts. Attached to the stone in the middle is a bronze relief depicting Heikki Ritavuori, whose name and dates of birth and death are inscribed on the stone. The grave is surrounded by low fence of granite. Eemil Halonen made the portrait relief of Ritavuori from photographs provided the latter’s widow Katri Ritavuori. In a post card accompanying the pictures, she wrote: ‘The pictures are very large enlargements of a small group photo and are therefore unclear. But I think they are quite good. I hope they reach you in time.’ The post card was dated 29 July 1926, which means that the sculptor had less than three months to make the relief and have it cast in bronze by his brother Arttu Halonen in Lapinlahti. 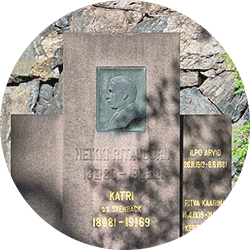 Minister of the Interior Heikki Ritavuori, Master of Laws (Henrik Rydman until 1905) represented the progressively minded but small left-wing liberal wing of the National Progress Party. He was a proponent of democracy, progressivism and social reformism. Conflicts were to be eased by removing societal problems. The ‘Ritavuori wing’, for example, had a markedly moderate attitude towards the losing side of the Civil War of 1918. In the debates over the Finnish constitution, Ritavuori was a supporter of the republican form of government.

Heikki Ritavuori served as a minister in the governments of his fellow party member J. H. Vennola in 1919–1920 and 1921–1922. As Minister of the Interior Ritavuori often warned against the plans of right-wing activists to carry out a coup d’état. He was averse to right-wing political cooperation, aiming instead at integrating the Social Democrats into the government. The right wing, in turn, felt that Ritavuori underestimated the danger of the political left and undermined the unity of the White side.

A popular revolt against Bolshevik rule in East Karelia at the turn of 1921 and 1922 became Ritavuori’s biggest problem. Finnish volunteers set out to assist the Karelians, which led to tense relations between Soviet Russia and Finland. In his role as a government minister, Heikki Ritavuori rejected assistance to East Karelia and had volunteers returning from there arrested, albeit also communists with positive attitudes to Soviet Russia. As a result of this crisis, the mentally disturbed businessman Ernst Tandefelt, a fanatical right-wing support, shot Ritavuori on 14 February 1922 at the door of the building where Ritavuori lived in Nervanderinkatu Street in Helsinki. Heikki Ritavuori was the first victim of a political assassination in independent Finland.