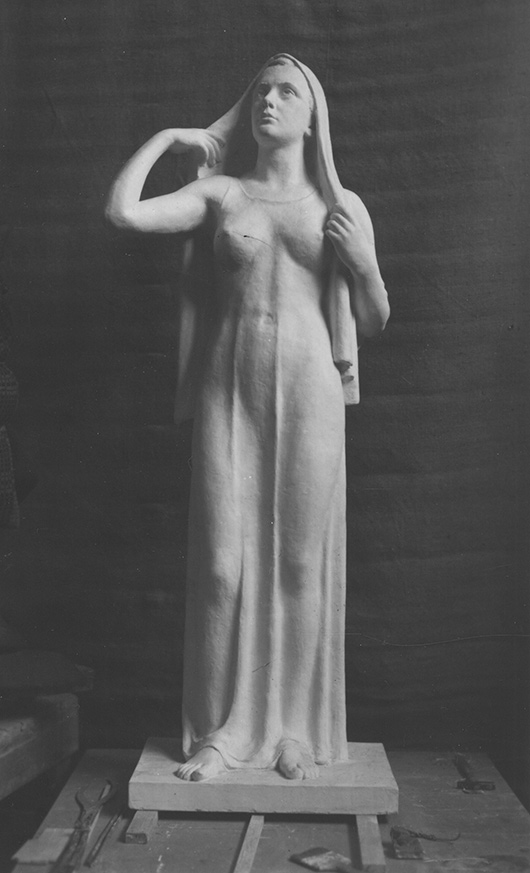 Eemil Halonen’s sculpture Huntu (Veil) stands on the family grave of Commercial Counsellor Heikki Peura and Mrs Aina Peura. The idea of commissioning the work of sculpture from Eemil Halonen came about in discussions between the Peuras’ daughter Liisa Falkenberg ( 1894 –1963) and singer Ester Laitinen (1885 –1959).

Liisa Falkenberg, mistress of Haminalahti Manor, wrote on 25 July 1946 to Eemil Halonen that a few young artists had already expressed their interest in making the funerary sculpture, but she did not believe that ‘they would provide anything suitable, being maybe too modern with their works – for the departed were old-fashioned people who would best understand art of their own period’.

Falkenberg pointed out that her mother preferred artists of her own province ‘having been happy and proud of their success’. Mrs Falkenberg commended Eemil Halonen’s beautiful funerary monuments and requested a sketch and outline  of the statue, its materials and costs.

After the war, Heikki Peura’s heirs had decided to sell their childhood home, Korhola Manor, which is why they also hurried the making of the funerary sculpture. The Peura family grave covered an area of 8 metres square. Located near the belfry of the churchyard, it was separated from the rest of the cemetery by a fence of black granite. ‘In the summer we have had  laurel bushes in the corners, a green lawn on the graves, hortensias and flowers’. In the finishing touches to the grave site, the  laurel bushes were to be replaced with rose bushes with large red flowers.

In the background of the sculpture were the age-old birches of the graveyard. ‘The site is calm and beautiful and there are no disturbing monuments nearby’, wrote Liisa Falkenberg. She felt that the granite fence was dignified and beautiful, especially when it would be enhanced from the inside with rose bushes. For this reason, ‘the artwork on the grave should not be too massive, but liberating and uplifting with its dark hue’.

Cast in bronze, Huntu (Veil) was completed in the spring of 1947. It depicts a barefooted woman clad in light drapery standing in an upright pose. She is holding a veil on her head, slightly raising it with her right hand. The figure is looking up to the right, to the brilliance of heaven.

Mrs Liisa Falkenberg apparently held a memorial celebration for her parents at Korhola Manor on 4 July 1947, in honour of the completion of the work sculpture. The date was the 54th wedding anniversary of Heikki and Aina Peura. Liisa Falkenberg wrote as follows to Eemil Halonen in May 1947:

That day before the haymaking would be a suitable one for the closest relatives to gather at Korhola with remembrance in mind. It is difficult to hold any bigger celebrations there any more, because the former one hundred head of cattle is now down to one single cow. So one really does not care to stay there longer and therefore it feels good that this duty belonging to us who remain and our expression of thanks will be carried out,  for visits there will become rarer for practical reasons alone.

While still in his early twenties, industrialist and manor owner Heikki Peura (1870–1937) acquired the large and old Korhola Manor in Rautalampi in 1891. The property was at first nominally owned by his father Adolf Peura of Laukaa, who had a large estate of his own. Later, in the early 1910s, Heikki Peura also bought another large property, Haminalahti Manor in the Rural Municipality of Kuopio, near the city of Kuopio.

Although Heikki Peura had attended only three classes of primary school, this did not impede his success in business. He had a dairy at Rautalampi, the products of which were exported as far as England, Germany and Denmark. He established the Iisvesi saw and flour mill at Suonenjoki in 1896 and a later bobbin factory that had approximately 100 employees. Heikka Peura built the Pitkälahti sawmill near Kuopio in 1911, accompanied in the 1930s by an export-oriented wood-planing works and a joinery factory. All the factories were near the railway line passing through the area. Peura also owned three tug-boats, two iron barges and one passenger boat. He was awarded the honorary title of commercial counsellor in 1922.

Heikki Peura also had positions of trust. In 1892, he was involved in founding a savings bank at Rautalampi and served on its board and as one of the representatives of the account holders. Later, in the 1930s, he was active on the board of governors of the Kansallis-Osake-Pankki bank and was also chairman of the municipal council of Rautalampi. Heikki Peura founded the Rautalampi Museum together with his wife Aina (née Kukkonen, 1872 –1940).