The grave of actor and academician Joel Rinne – Potrait relief 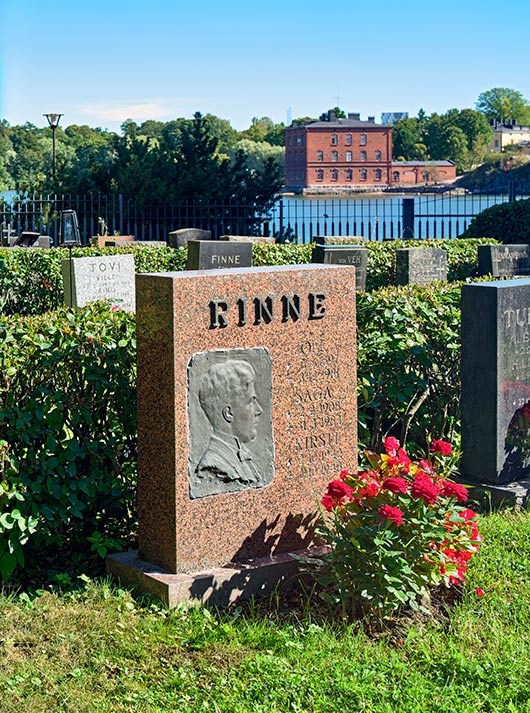 Eemil Halonen’s bronze relief of Joel Rinne from 1920 is attached to Rinne’s gravestone. Halonen met Rinne most likely through his youngest brother, painter Kalle Halonen (1899 –1947). Kalle had studied with the brothers Jalmari and Joel Rinne in the late 1910s at the School of Acting of the National Theatre of Finland. Kalle and Joel were also room-mates at one time. After the Civil War of 1918, the young newly graduated, actor posed for Eemil Halonen’s statues for memorials of the War of Liberty. Around this time, Halonen also made a plaster portrait relief of Joel Rinne.

Actor and academician Joel Rinne is one of the legends of Finnish theatre. He graduated from School of Acting of the National Theatre of Finland in 1918, after which he worked in the small, experimental Vapaa Näyttämö theatre and in the early 1920s in the Kansan Näyttämö and Viipurin Näyttämö theatre companies. Rinne pursued a long career from 1928 to 1972 at the National Theatre of Finland, playing in a wide range of roles, and many of his interpretations have become part of the history of Finnish theatre. He was awarded the Pro Finlandia Medal in 1953.

Rinne also acted in many films and on radio, appearing in a total 60 films beginning in 1923 when silent films were still being made. He received the Jussi prize (a distinction awarded to Finnish actors) for his role as vicar and Captain Ahti Help in the film Kirkastettu sydän (1943). The Finnish public remembers him perhaps best for his title roles in the Komisario Palmu (Inspector Palmu) films. Rinne also played the leading role  of Colonel Saarnio in the Kuollut mies (Dead Man) films ( (1942, 1944, 1952).