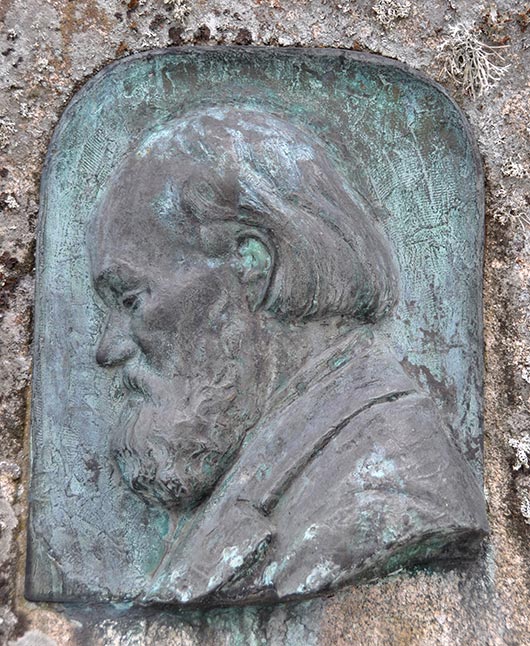 There is a bronze portrait relief of the deceased on the grave of Lassi Halonen, made by his nephew sculptor Eemil Halonen. The relief is attached to an unworked natural stone. Lassi Halonen’s funeral became a local demonstration against Russification. Among other actions, money was collected at the memorial service to pay for the fines ordered by the authorities. At the same time, the idea emerged to commission the funerary monument with local funds.

Lassi Halonen’s gravestone was unveiled on 21 October 1913 at the cemetery of Lapinlahti with patriotic ceremonies and a large audience of participants. The event ended with three cheers for the memory and life’s work of Lassi Halonen and the ideology that he had served. 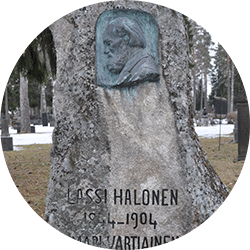 Lassi Halonen participated in the municipal affairs of Lapinlahti, serving as the head of the municipal council. He was brave and active proponent of the pro-Finnish cause. The newspapers of the province described Lassi Halonen as a fighter for justice, whose motto it was ‘to rather be broken than to bend’.

Lassi Halonen was a member of the local pro-Finnish Sampo Society, which held patriotic evening events and collected funds for purposes such as the schooling of poor children, the local voluntary fire brigade and library activities. From 1902 to 1904, members of the society took part in military call-up strikes, and also other respects, the society drew the negative attention of authorities.

The call-up strikes were a form of Finnish passive resistance to increasing Russification measures. In 1901, Emperor Nicholas II of Russia had decreed a new act on military service in Finland whereby the Finnish army was joined to the Russian army. Russian officers were given access to positions in the Finnish army, and Finnish troops could be sent to other parts of the Russian Empire. The call-up strikes, however, had an effect and in 1905 the implementation of the military service act came to an end.

Lassi Halonen was involved on organizing meetings at Lapinlahti from 1902 to 1904 in support of the call-up strike. As a result, the local police chief gave the Sampo Society a severe official reproof in 1904. Lassi Halonen was ordered to pay a fine and resign from the society together with clerk Kalle Kähkönen.