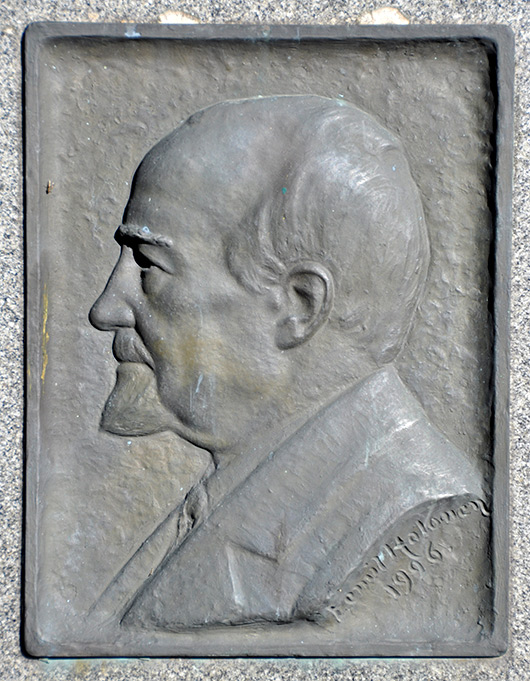 The portrait relief on commercial counsellor Lauri Kärkkäinen’s grave was made by sculptor Eemil Halonen. He had already made a previous portrait of Kärkkäinen and they had collaborated in the project for the funerary monument for Petteri Kumpulainen. 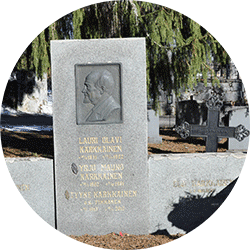 Commercial counsellor Lauri Kärkkäinen (1851–1922) was one of the most influential men of North Savo. The son of a farmer from Kiuruvesi, he progressed from an uneducated shop assistant to being the owner and managing director of the Kärkkainen and Putkonen trading house, which had a leading role in the region. Kärkkäinen was the son-in-law of Joachim Putkonen, the founder of the company, and the business partner of Putkonen’s children.

During Lauri Kärkkäinen’s ownership, the trading house was most important enterprise of the Iisalmi region, whether measured in turnover, the number of employees or its international contacts. In addition to flour mills and a sawmill, the company’s  operations included wood-planing and carpentry works, a brickworks, a feed factory, tar and turpentine works, a mechanical repair shop and a cement-casting works, and, as far as is known, Finland’s first factory to make prefabricated wooden houses.

Lauri Kärkkäinen based the profitability of his sawmill and timber operations on forest properties, which he acquired in the Iisalmi region and in Kainuu. At their largest, the company’s forest holdings totalled approximately 18,000 hectares. Kärkkäinen & Putkonen also engaged in wholesale and retail trade. The company had branch offices in Kuopio and Kajaani, and for a while an office in St. Petersburg.

The Kärkkäinen & Putkonen company was involved in cargo ship traffic from Iisalmi to the Baltic Sea, exporting timber all the way to Germany and England. During World War I, the export of sawn timber, however, ended. Even in the turmoil of the Russian Revolution, firewood continued to be sold to St Petersburg, but there was no grain, only small amounts of salt, for the return cargoes. In the summer of 1918, the border between Finland and Russia was closed, and Kärkkäinen’s ships ceased to trade with St Petersburg. Kärkkäinen & Putkonen’s fleet was at its largest in 1918, consisting of nine steam boats and twelve barges.

Lauri Kärkkäinen was a member of the delegation that petitioned in 1891 for Iisalmi to be given a to​​wn charter. He headed the municipal treasury of the township and later town of Iisalmi from 1882 to 1897. Kärkkäinen was also the first chairman of the Iisalmi town council, serving in this capacity until his death. He was among the founders of the Iisalmen Säästöpankki savings bank, the voluntary fire brigade, the local Civil Guards and the Evangelical-Lutheran town congregation. Kärkkäinen was also involved in recruiting young men to be trained as Jaegers in Germany in the independence movement.