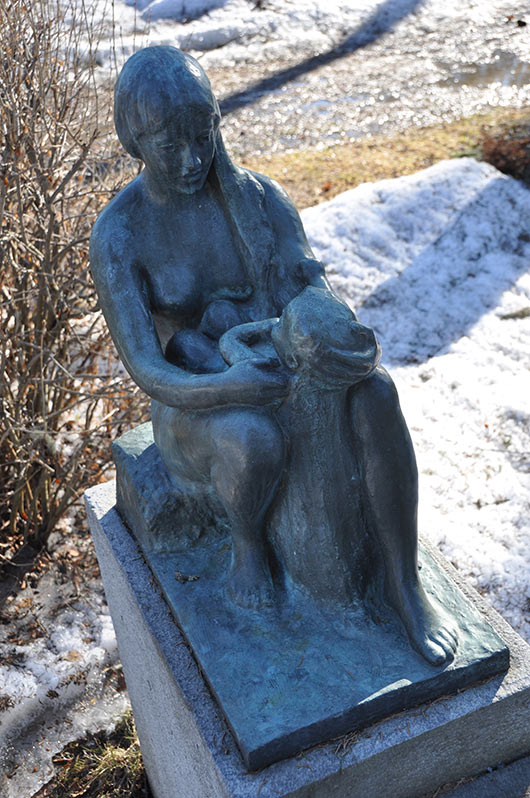 Eemil Halonen designed the monument for the family grave of merchant August Puurunen and his wife Maria Sofia (1878–1952, née Väisänen). The first to be buried there were the couple’s daughters Liisa (1906 –1907) and Annikki (1908) who died in infancy. The sculpture became a topical issued during the Continuation War (1941 –1944), when August Puurunen was already in poor health.

Eemil Halonen wrote to August Puurunen in a brotherly tone in April 1942. The letter shows that they had already discussed the work of sculpture for the grave. Halonen sent a photograph of a sculpture which he felt was suitable for the grave, also mentioning its dimensions (height 66 cm, length 56.5 cm and width 34 cm), which indicates that the piece was The Mother Sang to Her Child.

Halonen mentioned that the sculpture would cost 30,000 marks when cast in bronze. He urged August Puurunen to make a decision in this matter as soon as possible, ‘before they’ll shoot all the copper into the hides of the Russians’. At the time, Finland was in the Continuation War of 1941 –1944 against the Soviet Union.

The Puurunens ordered the work and the redesigning of the grave site. The stone parts were made of grey granite from Paloisvuori in Iisalmi and worked to a fine chiselled finish. The inscriptions were cut on dark-hued panels. The piece of sculpture was placed on a relatively low granite stone next to the actual gravestones.

The theme of the sculpture is motherly love and the birth of new life. The mother is sitting on a low seat, holding her small child in her lap. They are looking at each other.

The love between a mother and a child is a central theme in the oeuvre of Eemil Halonen. According to Mrs Alli Halonen, Eemil had a very close relationship with his own mother, which explains his liking for sculptures of this type. ‘I feel that he has sung a beautiful song for the mother and the child’, Alli Halonen also observed.

The figure of a mother singing and playing with her child also seems to be suited to the character of August Puurunen, who died the spring of 1946 and was described as followed in an obituary published on 25 April in the newspaper Salmetar:

The memory of August Puurunen is that of an even-tempered, restrained merchant who knew his own field and of a good friend to all of us with a sense of humour. 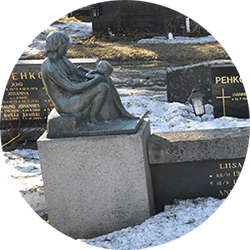 Merchant and shop owner August Puurunen (1879–1946) was the son of an honorary lay judge of Lapinlahti. In his youth, August Puurunen served as an assistant in P. Jääskeläinen’s and Kalle Koponen’s stores in his home locality. In 1905, at the early age of 25, Puurunen opened his own general store in Iisalmi. The store was originally located in rented premises on Satamakatu Street, and a few years later it moved to its own premises and closer to the railway station to Savonkatu Street.