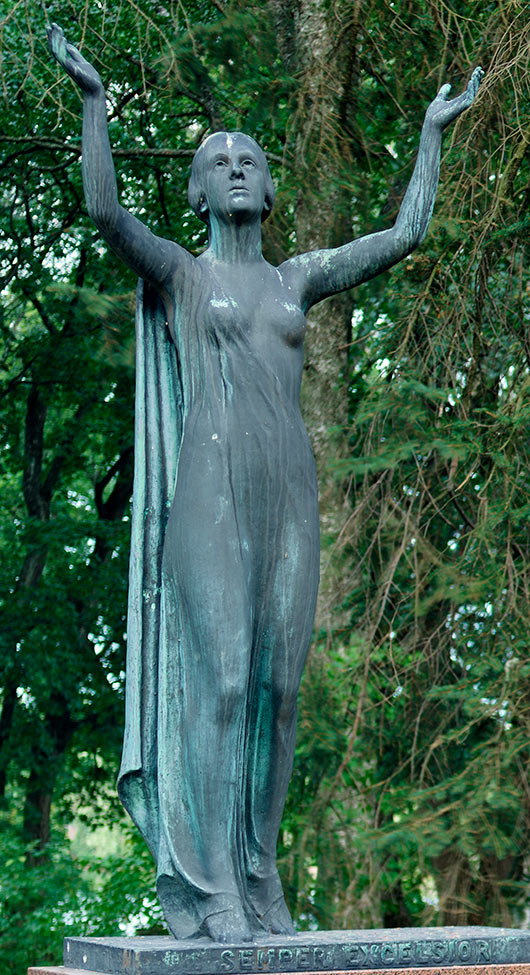 Semper Excelsior was unveiled at Hietaniemi Cemetery in Helsinki on 28 November 1934 in recognition of the work of Professor Ernst Nevanlinna for the Finnish people. The Bank of Finland and the Parliamentary Banking Commission had commissioned the funerary sculpture from Eemil Halonen and it was immediately described as ’sublimely beautiful’.

The statue’s cast-bronze female figure is rising up as she were about to speak to higher forces. The stand of the statue is ground and polished red granite from Vehmaa and bears the inscription Semper excelsior (Ever higher). There is also a bronze relief of Nevanlinna’s face on the gravestone. The whole funerary monument is 3.5 metres high.

Down to its very name, the sculpture is a metaphor of the life and work of Professor Ernst Nevanlinna. At the unveiling, Väinö Tanner, the chairman of the Parliamentary Banking Commission, observed:

In his lifetime, Ernst Nevanlinna was an untiring worker. And we saw his personality as if it were continuously growing. In his last years, he arose from the midst of conflicting times as a whole, serene and boldly forthright man steered by his convictions. His inner life appears to have followed the motto Semper excelsior – ever higher and higher.

Mrs Ines Nevanlinna thanked Eemil Halonen very deeply for his work of art, which so sublimely depicted Ernst Nevanlinna’s spiritual identity and its principle of semper excelsior. She expressed wonderment over ‘how much spirit and soul there can be in that dead matter!’. Mrs Nevanlinna was so attached to the monument that she even considered having it moved to safety during the war and asked the sculptor for advice about this. In 1948, she congratulated Halonen on his birthday: ‘I once again wish to thank you for this manifestation of beauty and high ideals that has been the lighthouse of my pilgrimage. It helps me to look upward beyond grief, to eternity.’ Ines Nevanlinna noted Eemil Halonen’s art was ’not only joy and pleasure, but outright consolation.’

Semper Excelsior was a widely admired work of art from the very beginning. A replica of it was installed on the grave of Anne-Marie Appelgren (died 1940) in the cemetery of Turku. A later cast version of it was erected at the cemetery of Lapinlahti in the 1960s. 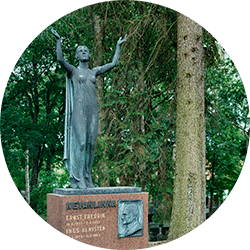 Professor of Finance Ernst Nevanlinna (Neovius until 1906) was the chairman of the Finnish Party and represented it in the Finnish Parliament. He was also the editor-in-chief of the Uusi Suomi newspaper. Having begun his career as a teacher and researcher of history, Nevanlinna went on to specialize in economics and finance theory in particular. He pursued his academic career at the Helsinki School of Economics and Business Administration, the University of Turku and the University of Helsinki.

In economics, Ernst Nevanlinna mainly followed the teachings of the so-called ‘socialists ex cathedra’ who maintained that efficient social policies should be aimed at the working class, while combating Marxist socialism at the same time. Also in political terms, Nevanlinna represented academic social reformism. As a pro-Finnish Fennoman, he supported Finnish nationalism, but was averse to the extreme right.

Ernst Nevanlinna followed his political career in the Finnish Party and later in the National Coalition Party. He was the chairman of the Finnish Party for over ten years, from 1906 to 1913 and from 1916 to 1918. Nevanlinna was also editor-in-chief of the party’s newspapers Uusi Suometar (1906 –1913) and Uusi Suomi (1919 –1922). During the years of Russianization policies before national independence, Nevanlinna took an accommodationist line and did not yet believe that national independence could be possible in 1917. In the debates over the form of government, he supported the monarchists and would have wanted to change the Finnish Parliament into a bicameral body.

Ernst Nevanlinna served as a member of the Finnish Senate and Parliament  and was also Speaker of the Finnish Parliament in 1918. He was removed from leading political positions in the early 1920s and he became frustrated with politics, after which his only political role was to represent his party on the Parliamentary Banking Commission.

Nevanlinna was an excellent and highly admired speaker, whose speeches were published in a posthumous collection. He died suddenly in the late summer of 1932 from blood poisoning that had started from a small wound while swimming.