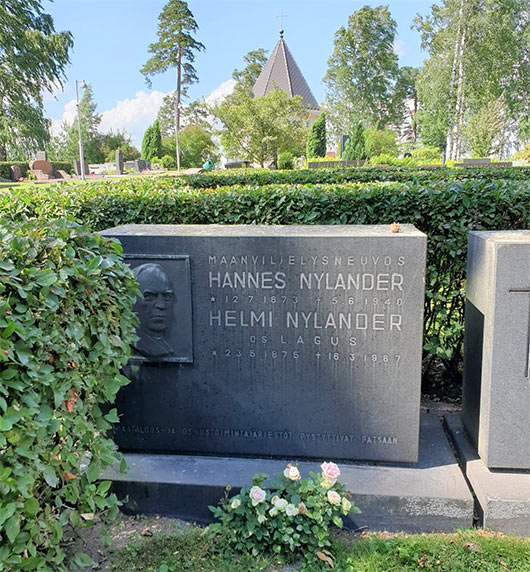 Sculptor Eemil Halonen made the portrait relief for the grave of Hannes Nylander in the cemetery of Kulosaari, which is now part of Helsinki. The gravestone was erected by agricultural and cooperative organizations in 1943 during the Continuation War (1941 –1944).

Agricultural Counsellor Hannes Nylander (1873–1940) was an early figure who promoted Finnish cattle and dairy farming. He played an important role in the breeding of domestic cattle and in improving feeding and care conditions for livestock.

Hannes Nylander was born in the village of Jynkkä in Kuopio Parish into the family of District Physician Anders Edvin Nylander. Their property, Rauhalahti, was a model farm that served as an example for livestock and dairy farming in Eastern Finland. After completing his matriculation examination, Hannes Nylander first studied surveying and then to become an agronomist. He went to Denmark to acquaint himself with international expertise in new dairy farming.

In the early stages of his career, Hannes Nylander taught in several agricultural schools, at Peltosalmi, Mustiala, Orismala and Kurkijoki. He worked as the first cattle-breeding consultant for the Agricultural Society of the Province Kuopio from 1899 to 1903. Nylander organized dairy courses and livestock prize events, supervised dairy inspection stations, established cooperative dairies and led the activities of the provincial dairy keepers. He also headed the Eastern Finland Cattle Breeding Association in its early stages.

Hannes Nylander’s wife was Helmi Nylander (1875–1967), editor-in-chief of the Emäntälehti farmwives’ magazine, and the daughter of Agricultural Counsellor Johannes Lagus of Iisalmi (1846–1922). She was also the chairwoman of the Marttaliitto women’s association. The Nylanders had their own farm property in Iisalmi in 1904–1906 and later their own garden property in ​Kulosaari next to Helsinki from 1934 to 1938. In Iisalmi, Hannes Nylander served, among other duties, on the town council in 1905 and 1906. In the Finnish Parliament he was a member for the Western Electoral District of Kuopio from 1908 to 1913.

Eemil Halonen and Hannes Nylander had apparently known each other since the beginning of the 20th century, at the latest when Nylander married into the Lagus family. The Halonens and the Laguses interacted in many ways in the Iisalmi region. Inspired by the so-called Young Finnish ideology, Eemil Halonen and Hannes Nylander were also active in the same political party. Cattle breeding and the development of dairy farming were also a common area of ​​interest, as sculptor Eemil Halonen practised cattle breeding at his farms, Nerkoo and Linnansalmi, in the first decades of the 20th century.

In 1906, Hannes Nylander entered the service of the State Board of Agriculture in Helsinki and worked as a senior dairy farming inspector many years. In 1917, he was appointed to the post of Farming Counsellor for the Board’s Animal Production Division. Nylander also wrote agricultural textbooks and manuals. He resigned for reasons of health in 1926. In 1933, President Svinhufvud awarded Hannes Nylander the honorary title of Agricultural Counsellor.