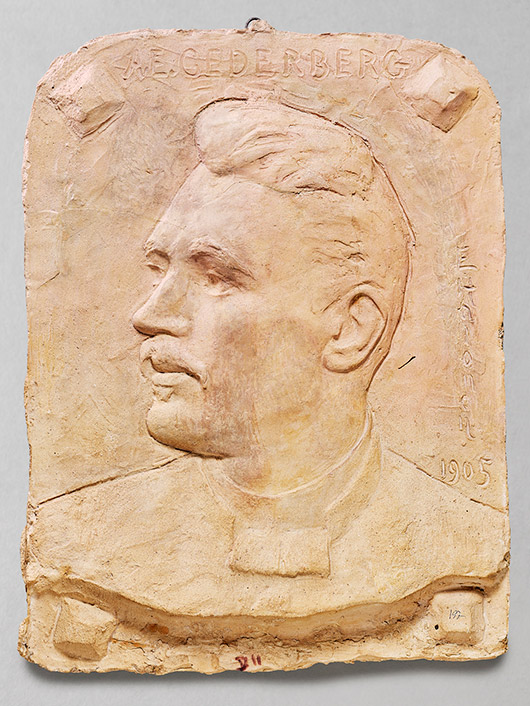 There is a bronze portrait relief by Eemil Halonen on the grave of August Evald Cederberg. In July 1904 Mrs Hedvig Hjelt wrote to Halonen to tell him that a suitable large stone had been found as the gravestone: ‘an upright stone of red granite almost completely split by nature’. The stone had already been moved to the grave and Hedvig Hjelt had commissioned a stonemason from Mikkeli to make the inscriptions on it. She now asked Eemil Halonen for advice on the style of the lettering and how the letters were to be attached to the stone:

If you could please take the trouble to draw the complete models for the inscription on the stone I would  be very grateful and I will certainly pay for it, as I fear that these rural stonemasons have so few models to choose from and do not always know how to be consistent when choosing the style of the letters.

August Evald Cederberg (1863–1903) was the chaplain of the Evangelical-Lutheran congregation of Valkeala and the son of Dean Jakob Cederberg (1825 –1887). He was married to Hedvig Natalia Hjelt and they lived in the parsonage of Jokela.