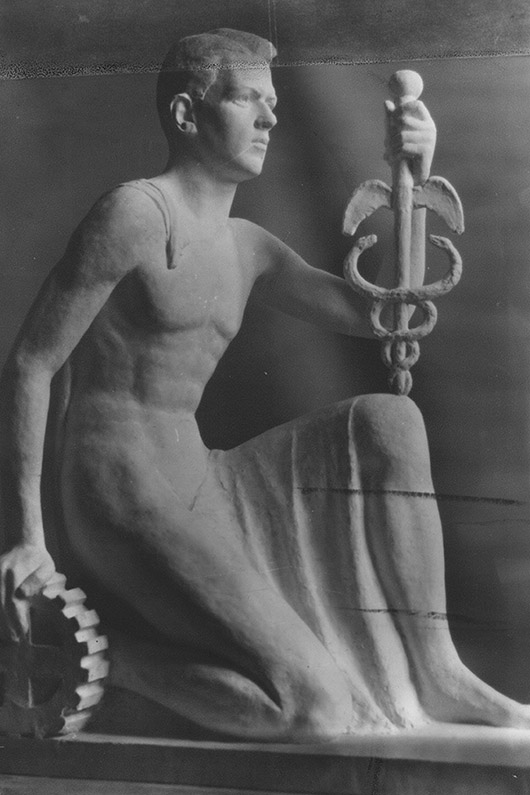 Vilho Nurmilahti, DSc. (Econ.) died after being run over by a truck in Mannerheimintie Street in Helsinki in June 1943. The funeral service was held in the chapel at Hietaniemi cemetery in Helsinki, but Nurmilahti was taken to be buried in his family grave at Koijärvi in Urjala.

The bronze sculpture The Gift of Mercury by Eemil Halonen is on Nurmilahti’s grave. It shows a half-kneeling young man looking ahead and holding in his left hand the winged staff of Mercury with two entwined snakes around it. He is holding the staff upright on his left knee. His right hand is resting on a wheel cross, also known as a sun cross, on the ground, a symbol of the cyclical nature of life and time. In Roman mythology, Mercury was the god of commerce and profit.

Vilho Nurmilahti (1899–1943) became known as the first person in the Nordic countries to complete the degree of Doctor of Economics. He came from Koijärvi in Urjala in the region of South-West Häme, where his father ran a sawmill.

In 1931, the Helsinki School of Economics was given permission to issue doctorates. Vilho Nurmilahti worked for seven years on his doctoral dissertation in business economics, which was published in 1937 in German with the title ‘Der formale Aufbau der Jahresvermögensbilanz’.

Vilho Nurmilahti was the manager of the Foundation for Economic Education and he was also active in the Foundation for the Institute for Research in Business Economics. As a community, the School of Economics meant a great deal to Vilho Nurmilahti, who had no family of his own. He participated actively in academic celebrations and created new traditions for the School.