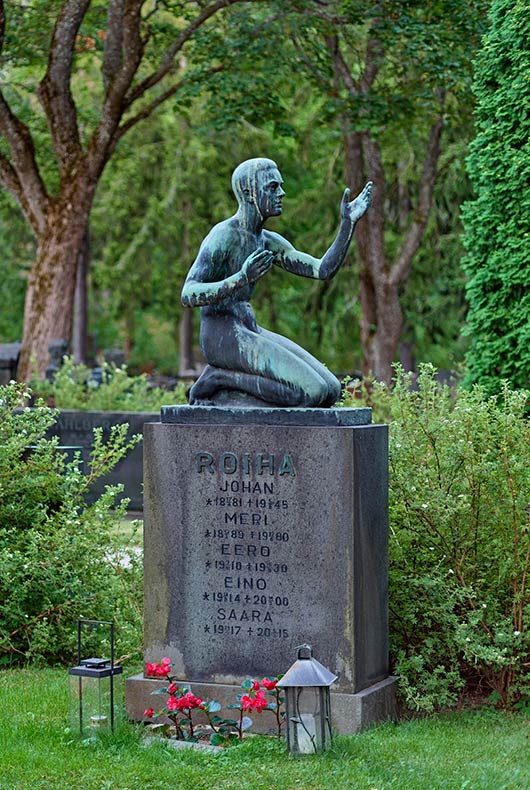 Eemil Halonen made the sculpture Herääminen (Awakening) for the grave of Eero Roiha. It shows a naked young man on his knees, with his gaze directed in front of him and his hands slightly raised. He appears to be awakening to a higher form of reality. The model for the statue was Eero Roiha’s brother Eino (1914 –2000) who went on to became head of the family company.

According to art historian Liisa Lindgren, the aestheticized images of death of the theosophists juxtaposed liberation and the aesthetic experience – ‘realizing the truth comprehensively and in a flash’. According to the theosophists, there was no real death. Instead, the spirit changes its state and environment. For theosophist Pekka Ervast, death is like sleep and the evolution of the human spirit passes through different stages of development. The goal is the ideal human being, ’whose knowledge is love and whose wisdom is power’. Mankind approaches its ideal by creating itself as the image of God. Everything is directed towards the same main goal and everyone passes through the same stages of development.

Awakening is on the Roiha family grave, where Johan Roiha, his wife Meri (1889 –1980) and their sons Eero and Eino lie buried. The piece was cast at Arttu Halonen’s casting works in Lapinlahti.

Eero Ilmari Roiha died of consumption shortly before his twentieth birthday. His father, Johan Roiha (1881–1945), worked as a railway engineer for the Finnish State Railways and was the head of significant textile-dyeing and laundry business operations in Helsinki as the main owner of the Uusi Pesula company and from 1922 as also the main owner of the W. E. Lindström company. Later in the 1930s, Johan Roiha was appointed Technical Inspector at the Ministry of Transport and Public Works and in 1938 he was given the title of senior engineer. The laundry business also expanded and Lindström became one of the largest companies in its field in the Nordic countries.