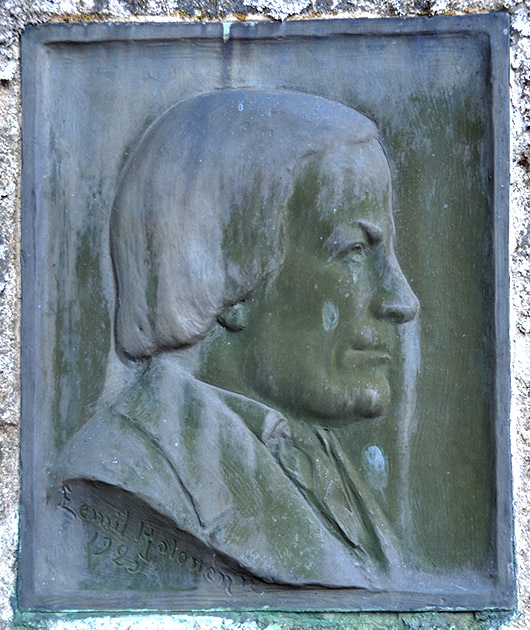 The initiative for the monument was made at Kumpulainen’s funeral in 1880. A committee was appointed for the purpose and money was collected for it in the Iisalmi region. The matter, however, did not proceed and in the summer of 1914, on the eve of the First World War, a meeting was held at the Iisalmi Cooperative Dairy where it was decided to continue collecting funds.

The new committee for the monument took upon itself the task of acquiring ‘an artistic grave monument’ for the cemetery. According to the plans, it was to be of natural stone with a bronze portrait medallion attached to it. The committee decided to ask the ‘Halonen brothers’ for a sketch for the piece.

The First World War interrupted the project. The overall price level rose so much that it ended to the committee’s enthusiasm. In 1917, the committee’s chairman, Commercial Counsellor Lauri Kärkkäinen, tried to negotiate a lower price, noting the ‘an artist called Hämäläinen’ had offered to make the memorial statue for less money than Eemil Halonen.

By this stage, the committee was preparing two memorials to Kumpulainen: a statue in the centre of the town and the funerary monument. Halonen’s estimate for the portrait relief at the grave was 2,500 Finnish marks, and 4,000 marks for ‘a bust larger than natural size’.

Political unrest and the serious illness of the committee’s chairman halted the planning and design of the monument for years. Inflation raised prices ten-fold between 1914 and 1922. With reference to this, Eemil Halonen raised his estimate, albeit moderately, to 17,000 marks, but the committee still lacked sufficient funds.

Lauri Kärkkäinen died in December 1922. The local farmer and member of the Diet and later Parliament Samuel Heiskanen (1850–1935) convened a public meeting in the summer of 1923 to decided on ‘the project for honouring the memory of Kumpulainen’. The committee perseveringly continued to collect funds and requested financial assistance. The aim was now only to acquire the statue for the grave. Author Santeri Rissanen described the committee’s idea for the monument in a letter dated 12 December 1924:

The intention is just to get a large and valuable stone for Kumpulainen’s grave, but one that is simple with only Kumpulainen’s name, his years of birth and death and some kind of brief dedication – plain like the man himself and those who will erect the stone, mostly Iisalmi men of the common people.

Eemil Halonen knew of suitable stones, which he had inspected for the funerary monument of author Juhani Aho in the nearby locality. In the spring of 1925, the committee accepted Halonen’s plaster study for the monument to Kumpulainen. According to the newspaper Salmetar, Halonen’s model for the statue was plain but dignified and ‘made a positive impression’.

The councils of Vieremä and the rural municipality of Iisalmi had to vote on granting funds for the monuments and the supporters of the assistance lost with a small margin. This matter was prominently mentioned in the national press, with comments following political positions. In the years after the Civil War of 1918 political tensions could still easily flare up. The political left interpreted the monument to Kumpulainen as a White project.

The well-known columnist Tiitus (Ilmari Kivinen, 1883 –1940) wrote in the Helsingin Sanomat newspaper on 21 September 1925 in a shocked and slightly sarcastic tone about the municipal council meetings in Iisalmi and Vieremä:

– – The socialists were up in arms about a gravestone for a ‘bourgeois’. As if anyone in Vieremä or Iisalmi knew anything about socialists or the right wing back in Petter Kumpulainen’s day, or as if his life’s work hadn’t been of equal benefit to  our present-day socialists and non-socialists.

The gravestone was unveiled before an audience of several hundred people on the 16th of August 1925, the 45th anniversary of the death of Petter Kumpulainen. It was a large piece of granite with moss and a bronze relief depicting Petter Kumpulainen. Eemil Halonen prepared the portrait from photographs.

Inscribed on the stone are Kumpulainen’s personal data, the coat of arms of Iisalmi and the dedication: ‘Erected by the grateful people of the locality’. The relief was regarded as a good likeness of Kumpulainen and the memorial committee was very satisfied. The monument cost a total of 18,000 marks, of which the last instalment, of over 4,000 marks, was paid to Eemil Halonen over a year after it was made. 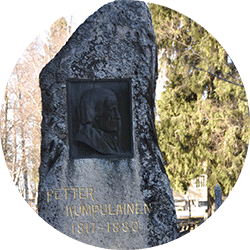 Farmer Petter Kumpulainen (1817–1880) of Iisalmi was a member of the Finnish Diet and an influential figure in the North Savo region. He represented the Estate of the Peasants at four sessions of the Diet in the 1860s and 1870s. Agriculture, traffic communications and education were important concerns for him. He campaigned for the building of a railway via Iisalmi to Oulu and supported expanding education for the whole population and into all parts of the country.

Kumpulainen also took minorities into account and called for schools to be established also for the Roma, arguing that they are people like everyone else, and sought to improve the rights of inheritance of women and illegitimate children. He was in favour of supporting Finnish art with state funds and was the first to petition at the Diet for the founding of a Finnish theatre.

Petter Kumpulainen was a determined and talented man of the people who improved himself and was interested in the affairs of society. He read books and subscribed to newspapers, to which he also contributed with his ’letters from Iisalmi’. Kumpulainen assisted illiterate local people in drawing up documents and used the Finnish language in official matters whenever possible.

The father of the town of Iisalmi

Petter Kumpulainen has a place in history as the founder of the town of Iisalmi. He understood the importance of the Saimaa canal, built in 1856, for this large but outlying rural parish, which was located on the upper reaches of the Lake Saimaa water system. A water route for steam boats via canals from Iisalmi to Kuopio would provide the Iisalmi region with trading connections all the way to the Baltic Sea.

Kumpulainen had the opportunity to present his ideas to Governor-General von Berg of Finland. His petitions were also published in Suomen Julkiset Sanomat, an official journal, in 1856, as an example of ‘how the common people of Finland are also involved in progress’. He was not quite alone, however, in these activities; the petitions were drawn up together of the progressive local vicar Johan Lorenz Lagus (1805–1881) and other influential members of the community.

Petter Kumpulainen petitioned in a wide range of matters for improving the region’s industries, communications, educational matters and health care. The use of local raw materials, industrialization, shipping routes and the founding of the town of Iisalmi were all closely linked to each other in Kumpulainen’s activities. Iisalmi needed merchants and trading vessels to export the products of the region

The township of Iisalmi was founded in 1860 and it received its town charter in 1891. The small township was surrounded by the large rural municipality of Iisalmi, with Kumpulainen actively involved in developing its local administration. He was also the first chairman of the municipal council.