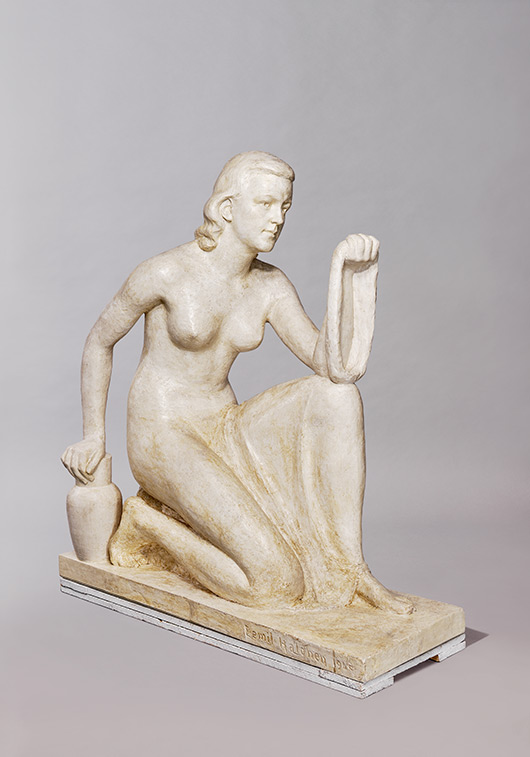 Elämänlankavyyhti (The Skein of the Thread of Life)

The Skein of the Thread of Life is a work of sculpture by Eemil Halonen on the family grave of factory-owner Toivo Mäkinen. The finishing of the piece was delayed by war-time conditions and the shortage of plaster. The plaster model was finally completed in the spring of 1945, but there was still not enough plaster for casting the bronze. Halonen wrote to Toivo Mäkinen’s widow, Bertta Mäkinen, in the early summer of 1945: ‘The plaster was made in Germany and it is not available now. They have tried to make plaster in Finland and they think they have succeeded with it, but it cannot yet be used.’ In November, Halonen wrote that plaster was finally available. Two to three months had to be reserved for the casting work, which meant that the statue could not be unveiled until the early summer after the ground had thawed. Arttu Halonen shipped the ’Keuruu statue’ from the railway station at Lapinlahti on 21 May 1946.

The statue honours the life’s work of industrialist Toivo Mäkinen and his wife Bertta Mäkinen (1882–1966) as the owners of the stocking weavery. It is a one of Eemil Halonen works of the female figure of Fate, in which human life and its continuity are represented metaphorically as spinned thread.

In this piece, a young woman bent down on one knee is holding a skein of thread with her left hand while resting it on her other knee. She is looking pensively at the thread that she has spun. Her right hand reaches back with her palm resting on an urn.

Bertta Mäkinen suggested the following ‘slightly unconventional’ but carefully considered verses to be inscribed on the gravestone:

I once lived – lived and existed –
Sorted the threads of life
Now I no longer – live, exist–
I have gone to the realm of the dead

Bertta Mäkinen also had version in the second person singular that would have been more directly appealing to visitors to the grave. Eemil Halonen felt that the text was too long to be inscribed and suggested the following motto:

Once I, too, lived and existed,
and sorted the threads of life.

Bertta Mäkinen appears to have accepted the shorter version, but made slight changes to the word order in the Finnish original. 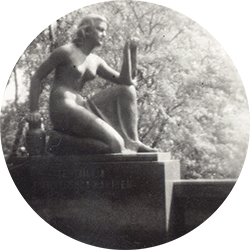 Industrialist Toivo Teodor Mäkinen (1886–1941) founded the Keuruu stocking factory in 1922. It operated until 1981, first in a small temporary building in the yard of Mäkinen’s home. In 1926, it was moved to the premises of the former municipal hospital of Keuruu. At the time, the factory had ten weaving machines and fifteen employees. A couple of years later, a dyeing plant was established in connection with the factory. The firm expanded and a new plant was built in 1938. The Keuruu stocking factory was an important local employer of women and one of the first textile factories to be established in a rural locality in Finland.