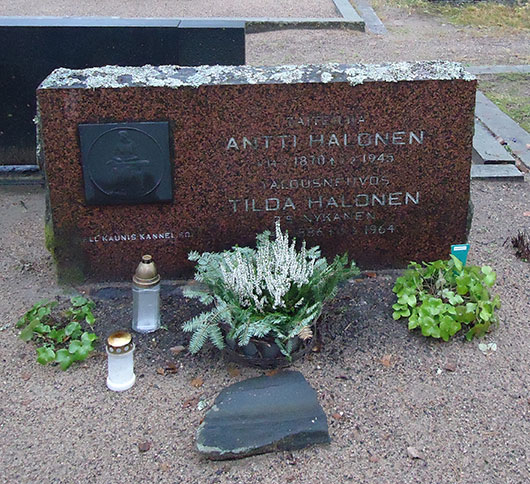 There is a bronze relief by Eemil Halonen of a young woman playing the stringed kantele instrument on the family grave of Antti and Tilda Halonen. Inscribed on the gravestone is the line ‘The fair kantele resounds there’ from the Pietist hymn Nyt ylös, sieluni (Arise, my soul), based on a folk tune.

Antti Halonen’s mother Vilhelmiina Halonen (née Uotinen, 1840–1913) was a kantele player, whose tunes were recorded in writing by the well-known musicologist A. O. Väisänen, who published them in his work on kantele and jouhikko (bowed lyre) tunes in 1928. According to teacher Kaarina Halonen (1922 –2013), the daughter of Antti and Tilda Halonen, the kantele was a symbol of home and mother for the sons of Grandmother Miina, as Vilhelmiina Halonen was known. Antti Halonen inherited his mother’s last kantele, which had been made by his brother Aapeli (1863 –1928) as a young man.

Like his brother Aapeli, Antti Halonen made kanteles and harmoniums. Antti Halonen had also dreamed of studying to become a cantor. Throughout his lifetime, Antti Halonen played the kantele for both his own pleasure and to entertain others at many social evenings and other events.

Master-builder, teacher and painter Antti Halonen (1870–1945) was the cousin of sculptor Eemil Halonen. Their fathers were brothers and both families lived on the old family farm at Linnansalmi in Lapinlahti.

Antti Halonen designed many houses and buildings and worked as a master-builder. The most famous of his works is probably Pekka Halonen’s studio and home, Halosenniemi, which was jointly built by the brothers.

Antti Halonen returned to Lapinlahti after the death of his father in 1914. Work on the farm took up time from painting and in order to obtain additional income he taught wood crafts and drawing at the North Savo Institute of Adult Education in Kuopio, where he met his future wife, Tilda Nykänen (1886–1964) who taught home economics there.