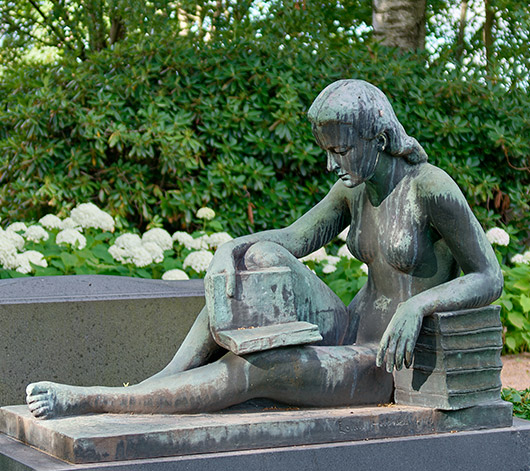 Eemil Halonen made Lause (Sentence) in 1946 for Nykänen’s grave. This work of sculpture symbolises Otto Nykänen’s life’s work, expressing his love for books and reading. It depicts a young woman sitting on the ground with one leg extended and the other bent. She is focusing on reading a book with her left arm resting on a pile of five books. 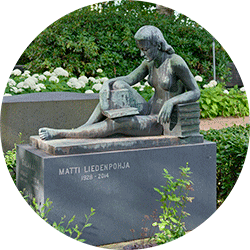 Otto Nykänen (1887–1945) was the managing director of the Lause printing works in Helsinki. He established his printing company together with his wife Suoma in Helsinki in 1924. Its premises were in the basement of a building at Kirstinkatu 1 in Helsinki’s Kallio section until the mid-1950s after which it moved to Höyläämötie 11 in Pitäjänmäki, north of the city centre. The printing works was acquired in 1968 by the Centre Party of Finland and it was merged in 1997 with the Suomenmaa group of companies, of which it became a subsidiary.