The grave of painter and professor Pekka Halonen – Joutsen (Swan) 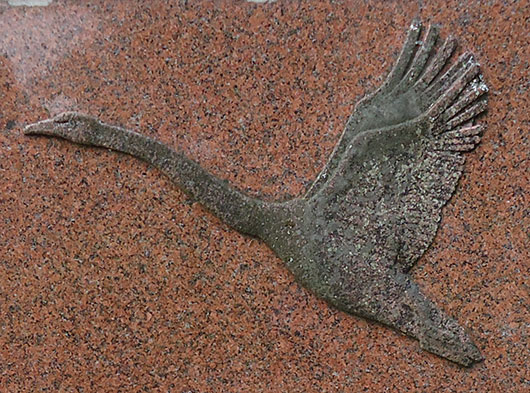 Attached to the red-granite gravestone of Pekka and Maija Halonen is the figure of a swan by Eemil Halonen.  It is taking wing to fly into the distance, ’from greyness to the sunset’, as described by Pekka Halonen’s son, author  Antti Halonen (1903–1985) in a book from 1946 on the work of his father (Vihreä aamu: Pekka Halosen siveltimen tarina ).

The swan, Finland’s national bird, was also Pekka Halonen’s favourite bird. Migrating swans would always stop to rest on Lake Tuusulanjärvi, a scene that Pekka Halonen often admired at Halosenniemi on the shore of the lake. Antti Halonen writes as follows:

On father’s last Christmas Eve, a large flock of swans made a farewell visit to the tip of our cape on the lake. The clouds lay low and the waters of the lake were black. The rocks by the shore had just been painted white by the first snow. A bevy of gleaming white birds came out of a grey cloud and stopped at anchor for a while at their old resting place. The scene was like a painting from father’s own symbolist period of searching: slightly gloomy, decorative in a restrained manner and with a melancholy dreaming to it.

The swans then took flight again, disappearing into the grey south as a white vibration growing thinner and thinner. Father watched them fly away in a state of quiet shock.

The swans were also his birds. 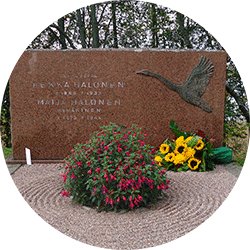 Professor Pekka Halonen (1865–1933) was one of the most important painters of the so-called Golden Age of Finnish art and was particularly beloved for his depictions of Finnish nature in winter. His aim was to create art of international standard arising from the people and culture of Finland.

Pekka Halonen was the cousin of sculptor Eemil Halonen. Their fathers were brothers whose families lived on the Halonen family farm at Linnansalmi in Lapinlahti.

Pekka Halonen was one of the first Finnish-speaking students in the School of Drawing of the Finnish Art Society in Helsinki. He did not have an easy start. The young Pekka Halonen was for practical purposes an uneducated country boy who could not speak Swedish, which was still the language of cultured circles in Finland, and who had been given a free place at the school by submitting an official document proving that he was indigent. During his studies at the school, he supported himself as an ornamental painter.

Pekka Halonen went on several study trips to France and Italy. In Paris, he studied under Paul Gauguin, among others. His breakthrough came with the painting Niittomiehet (Mowers, 1890), with his brother Antti as his model. Depictions of folk life continued in the paintings Avannolla (Washing on the Ice, 1900) and Ilveksenhiihtäjä (Lynx Hunter, 1900), which Halonen painted for the Finnish Pavilion at the Paris World’s Fair of 1900. Of his monumental works, Työstä lähtö (Leaving Work, 1907) was also painted at Lapinlahti, with relatives and friends again as models.

Pekka Halonen is known for his landscapes that are imbued with atmosphere. Finnish nature spoke to him wherever he happened to be. The skilled compositions of the paintings and their harmony of colour point to international influences, such as symbolism, japonism, and early Renaissance art.

Pekka Halonen noticed Eemil Halonen’s gifts, encouraging him to become an artist and arranging for him an apprenticeship with his friend, sculptor Emil Wikström.