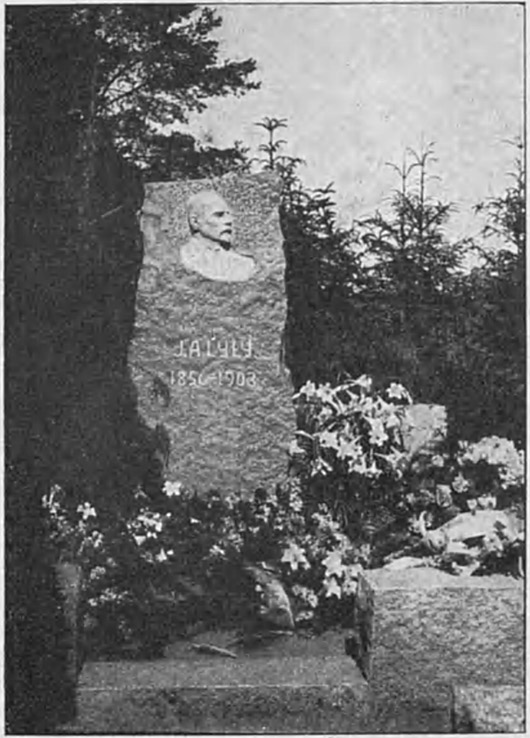 The funeral of Julius A. Lyly PhD was held in Viipuri on 21 June 1903. It turned out to be a major event in the province and a political demonstration against Russification measures. Sculptor Eemil Halonen made Lyly’s funerary monument approximately ten year’s after the latter’s death.

The granite monument to Lyly was unveiled at the Ristimäki cemetery in Viipuri in June 1914. The stone bears the deceased’s sculpted bust portrait, his name (J. A. Lyly) and his years of birth and death. The unveiling ceremony was very simple with only the laying of wreaths at the grave. A small formal event was held at the Hotel Belvedere.

The monument was commissioned by the members of the Young Finnish Party in Viipuri. The preparations had been of a very delicate nature. When the Young Finns of Viipuri had organized a committee for the monument, the Russian governor-general of Finland had intervened and tried to prevent it. Even after the unveiling, the governor-general requested explanations why the local police chief of the Viipuri district had not prevented the unveiling ceremony or reported it to other authorities.

The Ristimäki cemetery was destroyed during the Soviet period.

Julius A. Lyly PhD (Bergh until 1883, 1856–1903) was known as a journalist of the Viipurin Sanomat newspaper and a leading figure of the Young Finnish Party. He was the son of Julius Immanuel Bergh (1810 –1878) a Pietist clergyman of Kuopio, who later became the vicar of Liminka in Northern Ostrobothnia.

Ever since his student years, Julius A. Bergh had taken a radically pro-Finnish position, which included, among other things, Fennicizing his name to Lyly in 1883. Language teacher Julius A. Lyly defended his doctoral dissertation in 1889 and moved in the same year to Viipuri to teach at the Klassinen lyseo (Classical Lyceum) secondary school.

Julius A. Lyly was very active political and societal affairs, for example serving on the Viipuri City Council in the late 1890s and as chairman of the Viipuri Workers’ Association from 1891 to 1902, i.e. until the association adopted a socialist political position. Lyly was also inspired by the Rural Youth Association movement. He was among the founders of the Young Finnish Party and drew up its political programme in 1894. The Young Finns did not accept the politics of accommodation to Russification measures during the so-called Years of Oppression. He was a member of the radical wing even in the Young Finnish Party, a leader of the underground anti-Russian kagal organization in Karelia.

Julius A. Lyly was also a journalist. He bought the Viipurin Sanomat newspaper and its printing press in 1894. The newspaper followed the political line of the Young Finnish Party and was repeatedly warned by the censorship authorities during the Years of Oppression. The newspaper was banned in 1901 and Lyly was exiled. Suffering from economic hardship, Lyly committed suicide in Berlin in 1903.