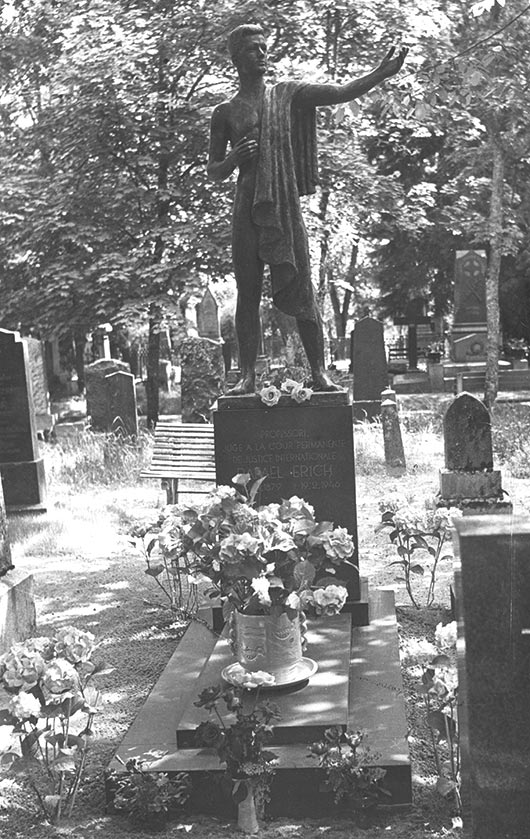 The grave of former prime minister and professor Rafael Erich is marked with a statue by Eemil Halonen depicting a standing male figure with a charismatic feel to it. The figure bears a draped piece of clothing on his shoulder. According to recollections, the model for the statue was actor Joel Rinne. Extending his left hand, the figure is addressing an unseen party as if urging to listen to him, to look at him, and to follow him. The friendly yet determined gesture of addressing the listener is underlined with the open palm of the hand. Art historian Liisa Lindgren has pointed out that many works of funerary sculpture by Eemil Halonen and his contemporaries depict a communicative situation in which the viewer remains an outsider. Symbolic gestures, facial expressions and the manner of dress deriving from the Roman tradition of rhetoric were important means of sculpture. Knowledge of classic rhetoric was still part of the general education of academically trained people of Halonen’s generation.

Rafael Erich was prime minister of Finland from 1920 to 1921. During the term of his government, the issue of the status of the Åland Islands was resolved, the Treaty of Tartu was signed with Soviet Russia, and Finland joined the League of Nations. Erich was a highly regarded diplomat, serving as the envoy of newly independent Finland in Berne, at the League of Nations, and in Stockholm and Rome.

Rafael Erich was born in Turku, completed his matriculation examination in Jyväskylä and defended his doctoral dissertation in laws in 1927. He was professor of international law at the University of Helsinki from 1910 to 1928 (and professor of constitutional law until 1922). This was followed by work in a variety of international duties.

In his lifetime, Rafael Erich was Finland’s leading expert in international and constitutional law and also highly regarded abroad. His scholarly output was also extensive. Erich still remains the only Finn to have served on the International Court of Justice in The Hague (1938–1939).

Rafael Erich participated in the independence movement prior to Finland’s declaration of independence from Russia in December 1917, defending the position and status of Finland in response to Russian policies of oppression. He was involved in the so-called Activists and was close to the Jaeger movement, in which young men went to receive military training in Germany in preparation for independence. Erich originally belonged to the Young Finnish Party and was elected to the Finnish Parliament in 1919 on the Coalition Party ticket.