The grave of Professor and Sculptor Emil Wikström – Potrait relief 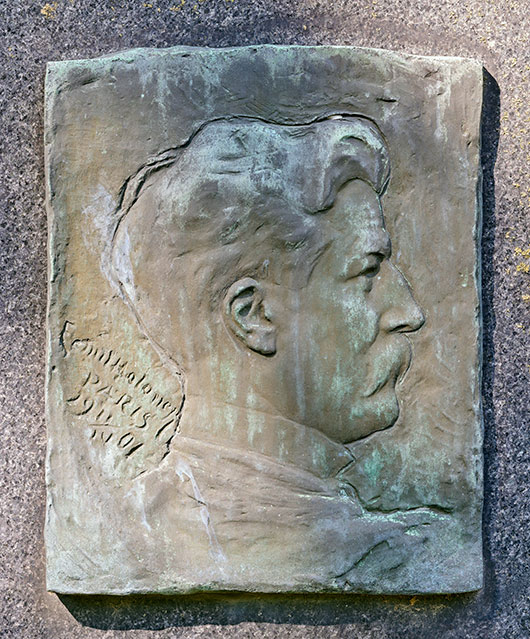 The grave of Emil Wikström is decorated with Eemil Halonen’s portrait relief of his teacher. Halonen was Wikström’s first apprentice and his pupil who achieved the greatest success in the arts. According to established custom, it was deemed proper for a pupil to remember his teacher. According to art historian Liisa Lindgren, there was often a kind of principle of equality between the artist and the one being remembered, the artist making the monument was just as highly regarded as the subject.

Eemil Halonen made the original plaster version already on his first study trip to Paris in 1901. The plaster piece also bears the text: ’Wikström shapes Malmberg, Malmberg shapes me, I shape Wikström’. Malmberg was the Finnish sculptor Viktor Malmberg (1867–1936). 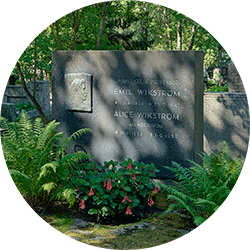 Professor Emil Wikström (1864–1942) was one of the most important Finnish sculptors of the late 19th and early 20th century. He represented national realism and was one of Finland’s leading makers of public artworks. His main works include the Elias Lönnrot monument (1902) in Helsinki, the sculptures of the pediment of the House of the Estates (1903) in Helsinki, the Pohjanneito (Maiden of the North) fountain (1913) in Tampere and the Lamp Bearer figures on the façade of the Helsinki Railway Station (1914).

Eemil Halonen came to work as Wikström’s assistant and apprentice at Visavuori, the latter’s residence, in 1895 when Wikström began to work on the figures for the pediment of the House of the Estates. In the following year Halonen entered the School of Drawing of the Finnish Art Society but continued to assist his mentor. The studio at Visavuori was destroyed in a fire in the same summer, and along with it the plaster draft versions of the pediment group.

After the fire, Emil Wikström moved with his family to Paris to finish the works for the pediment of the House of the Estates. Eemil Halonen was not yet prepared to move abroad at this stage and instead continued his studies in Helsinki. Even on Eemil Halonen’s first trip to France and Italy in 1900–1901, Emil Wikström provided fatherly support in many practical matters and in introducing Halonen to the international art scene in Paris. The contacts between the teacher and his pupil gradually became less frequent and turned into interaction between two artists on an equal basis.