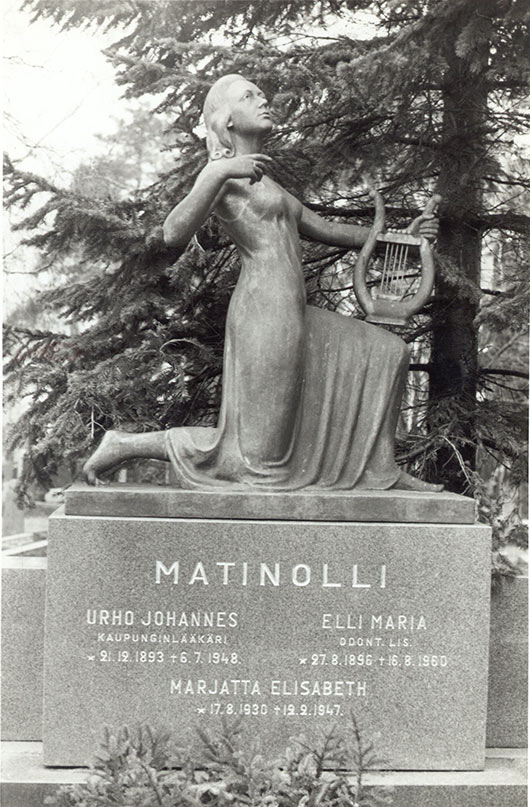 Eemil Halonen began to design a work of sculpture for the Matinolli family grave after the death of Marjatta Matinolli. In October 1947, Eemil Halonen sent by rail to the Matinolli’s a package containing two studies of a young woman playing the lyre. The estimate of costs was 356,000 Finnish marks, including the plinth. The completion of the bronze statue was delayed by political strikes organized in May 1948 by the SKDL communist front party and the Communist Party of Finland to protest the expulsion of Communist Minister of the Interior Yrjö Leino from the government. Eemil Halonen’s letter to the Matinollis indicates that also the workers at Arttu Halonen’s casting works had participated in the strikes.

The bronze sculpture depicts a young woman bent down on one knee, a spirit figure with a raised gaze. Her left hand is holding a lyre which also leans against her left thigh, and her right hand is bent at the side, ready to play the instrument. Art historian Liisa Lindgren has pointed out that Eemil Halonen recycled and varied the visual motifs and poses of his funerary sculptures, as in the female figure with her gaze uplifted to higher forces in works similar to the Matinolli piece.

The widowed Mrs Elli Matinolli appears to have been very satisfied with the sculpture. She wrote as follows to Eemil Halonen on 20 January 1950:

– – I wish take the opportunity to ask the price of a very small replica of Marja’s grave statue. It has become so dear to me and now that I rarely have the strength to visit the grave, I have thought that it would be very pleasant to have a miniature version of it at home to put on a chest of drawers.

Marjatta Matinolli (also known in the family as Marja, 1930–1947) died at the age of sixteen. She was the adopted daughter of senior municipal physicians Urho Johannes Matinolli (1893 –1948) and dentist Elli Matinolli (1896 –1960). The couple were influential citizens of Oulu and friends of the arts. Urho Matinolli was the first chairman of the Oulu Artists’ Society, founded in 1948.

In his early years, Urho Matinolli was an active member of the Civil Guards and a member of the Academic Karelian Society (AKS) throughout its period of activity (1922 –1944), having joined the association as its oath-sworn member no. 10. He was also the Academic Karelia Society’s first vice-chairman. The aims of the AKS were to assist refugees from East Karelia, work on behalf Finnish and related peoples, support so-called Pure Finnishness and campaign for national defence. The Society was disbanded in 1944 in accordance with the terms of the Finnish-Soviet Interim Peace Treaty.

Urho Matinolli died in 1948, only a year after his daughter Marjatta.