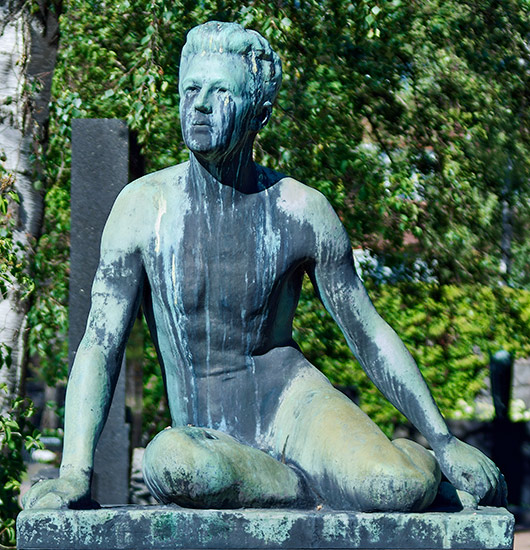 The sculpture Näky (Vision) from 1929 on Yrjö Kovero’s grave depicts a young man awakening to a higher form of consciousness. For the theosophists, death was an intermediary stage on the way to enlightenment. The young male figure is seated on the ground gazing into the distance. Attached to the smoothly polished red-granite headstone is a bronze relief of a young man on his deathbed. The sculpture and the relief were cast at the foundry of the artist’s brother Arttu Halonen in Lapinlahti.

According to art historian Liisa Lindgren, the young men depicted in Eemil Halonen’s funerary sculptures are not the genii of death, nor are the females angels of death. They are instead spiritualized and idealized figures. ”Images of aestheticized death blend liberation with an aesthetic experience – the sudden and complete realization of the truth”.

Under the relief of Yrjö Kovero there is an anonymous poem in Latin: 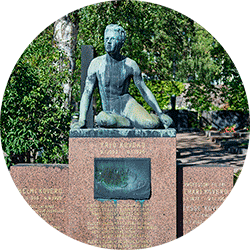 Student Yrjö Kovero died at the age of 24 in Helsinki. There is no further information on his life or the cause of his death. Yrjö was the son of Ilmari Kovero PhD (1877 –1963) and Hilma Kovero (née Haapala). His parents’ marriage ended in divorce in 1915, and in the following year Ilmari Kovero married Aino Tyyne “Tysse” Eriksson.

The Koveros belonged to the academically educated classes of the young republic of Finland. Ilmari Kovero was a well-known economist, whose career included teaching at the Finnish Businessmen’s Commercial College and the Helsinki School of Economics. Around the time of the death of his son Yrjö, Kovero was an industrial counsellor at the Finnish Ministry of Trade and Industry from 1919 to 1928. He was a highly regarded expert in, among other issues, matters of duties and free trade, which were topical in newly independent Finland.

Ilmari Kovero became an associate professor of statistics and national economy at the University of Helsinki and served later as professor of financial theory until 1944. He became a member of the Finnish Academy of Science and Letters in 1938.

Ilmari Kovero’s publications in economics concerned, among other topics, the theory of free trade, protectionism and taxation but he also wrote practically oriented textbooks on bookkeeping and commercial correspondence. Kovero also published poems under the pseudonym Martti Kolu.