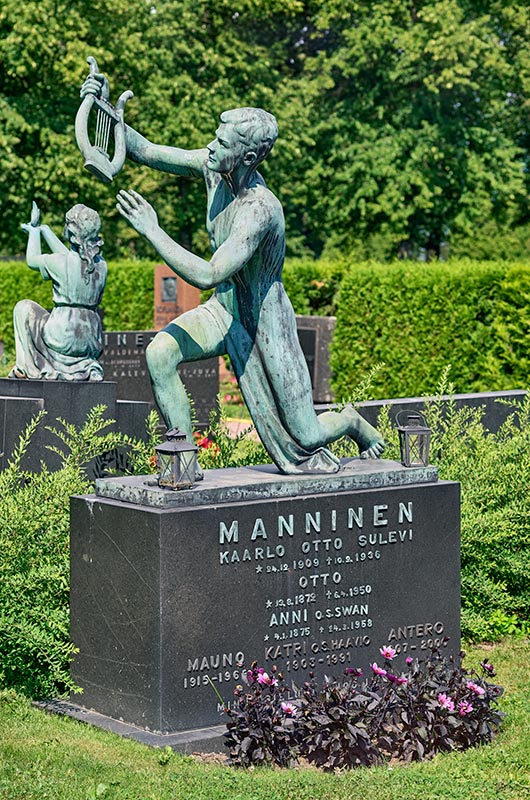 The Lyre Player was commissioned from Eemil Halonen for the grave of Sulevi Manninen. It was completed in 1937 and cast in bronze at the casting works of Arttu Halonen, the artist’s brother, at Lapinlahti. Otto Manninen and Anni Swan are buried in the Manninen family grave along with their three sons Antero, Sulevi and Mauno and Antero’s wife Katri (née Haavio).

In this sculpture, a young naked male figure is one knee, with his right hand lifting a lyre slightly upward and his left hand reaching for the strings of the instrument. As a symbol, the lyre alludes to poetry and is thus a metaphor of the literary talent of Sulevi Manninen – and the whole family. The god Apollo, of ancient poetry, music, fortune-telling and the art of healing is often depicted with a lyre in his hand. Lowermost on the gravestone is a quote from Psalms 42:2: ‘My soul thirsteth for God, for the living God’.

Eemil Halonen works of sculpture expressed the higher self sought by theosophists that gradually evolves towards divinity. According to art historian Liisa Lindgren, Halonen’s idealistic spirituality introduced a new kind of nudity to Finnish cemeteries. In the early 20th century, nakedness was viewed with tension in public art. The idealized heroic nakedness of male figures, however, was generally regarded as uplifting and associated with spiritual idealism of man.

Kaarlo Otto Sulevi Manninen, the second of the three sons of poet Otto Manninen (1872–1950) and children’s author Anni Swan (1875–1958), died of tuberculosis at the age of 26 in 1936. Sulevi Manninen held the degree of Master of Arts and was a promising young poet and translator. He had translated plays by Molière and before his death he published his first collection of poems in 1936.

Otto Manninen and Anni Swan were family friends of Eemil Halonen, who had known both of them before they were married. Anni Swan’s sister Aino had attended the same crafts school as Eemil Halonen in Lappenranta and Lappee and they had become friends there. Halonen was also in contact with the other sisters of the Swan family – ‘the nine black swans’. He came to know Otto Manninen at the latest on his first trip to Paris in 1900. Although Manninen himself was not politically active, he moved about in the same cultural circles of the Young Finnish Party as poet Eino Leino, author Juhani Aho and sculptor Eemil Halonen.

Otto Manninen was a trailblazer of Finnish poetry. He published his first work at the age 33 in 1905 and produced four collections of poems. Manninen was a highly regarded and prolific translator of poetry. His Finnish translations included the works of J. L. Runeberg, Molière, Goethe and Schiller as well as Euripides’ Medea and Homer’s Iliad and the Odyssey. Otto Manninen became a lecturer in Finnish at the University of Helsinki in 1913 and served as professor from 1925 to 1937.

Otto Manninen married Anni Swan in 1907. She was one of Finland’s first important authors of books for children and young people. She completed her matriculation examination in 1895, which at the time was still rare for girls. Anni Swan went on to study subjects in the humanities at the University of Helsinki for a while and worked in a bank. She graduated as primary school teacher from the Jyväskylä Teacher Training Seminar and taught in primary schools until 1915.

After marrying, Anni Swan concentrated on her duties as housewife and the mistress of a cultured home – as was customary in the period. At the same time, she wrote fairy tales and books for children and young people. Her books became classics of their genre and she also edited magazines for children. In addition to this, she was also an active translator of children’s literature into Finnish. When she and Otto Manninen were still courting 1906 they jointly translated Lewis Carroll’s Alice’s Adventures in Wonderland into Finnish.