The grave of teacher and principal Kustaa Castrén – Potrait relief

There is a portrait relief by Eemil Halonen on the grave of Kustaa Reinhold Castrén. 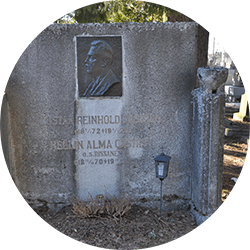 Coeducational school teacher and middle-school principal Kustaa Reinhold Castrén’s (1872 –1926) father was Johan Reinhold Castrén (1834 –1900), one of the first shop owners and merchants in the township of Iisalmi. As the other boys in the family died at an early age, Kustaa Reinhold remained the only heir, but he chose to become a teacher.

After matriculating from the Kuopion Lyseo Secondary School, K. R. Castrén began his university studies in Helsinki, but soon returned to his home town to become a primary school teacher. In 1905, he began work as a teacher of gymnastics, music and religion at the Iisalmi coeducational school. Alongside this work, he was also the principal of the local middle school from 1914 until 1920.

Kustaa Reinhold, or Renne, Castrén was an important figure in developing the town and later city of Iisalmi, serving as secretary of the town council for some twenty years. He was also the municipal treasurer from 1905 to 1916 and was elected in 1922 to the first church council assembly of the Evangelical-Lutheran Congregation of Iisalmi.

Renne Castrén was married to teacher Hellin Rissanen, the daughter local police chief August Rissanen. She was the principal of the Iisalmi municipal primary school in the 1920s and a leading figure in local cultural pursuits and charitable work. In 1895, she launched the founding of a Finnish-language coeducational school in Iisalmi. In 1922, she became one of the first women members of the town council – after universal municipal suffrage in 1919 had permitted women to participate in municipal politics.

The Castrén home was a centre of music and the arts in Iisalmi. Hellin Castrén led the local women’s choir and in the 1910s Renne Castrén founded a mixed choir, which was regarded as of very high standard. He also led the coeducational school’s student mixed choir and the student orchestra. It is said that the students’ annual celebrations were among the finest social events in Iisalmi. Renne Castrén also had a fine singing voice. Alongside cultural pursuits, he was also active in the town’s oldest sports club, Visa, serving on its board of governors and directing gymnastics practice at the club.

Principal K. R. Castrén’s funeral cortege filled the streets of Iisalmi in the late winter of 1926. Following her husband’s wishes, Mrs Hellin Castrén donated 10,000 Finnish marks to the town of Iisalmi as the base capital for the K. R. Castrén Memorial Fund, for the purpose maintaining the municipal library and making additions to it.