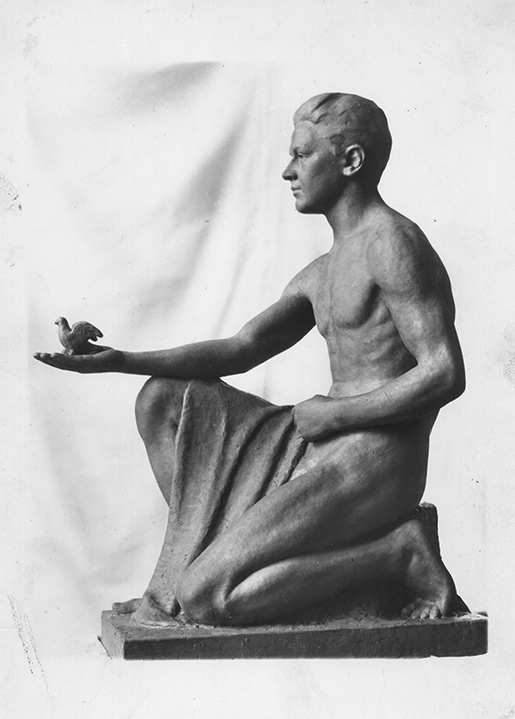 The Helsingin Sanomat newspaper commissioned the work of sculpture for Eero Erkko’s grave from Eemil Halonen, who was a supporter of the Young Finnish Party and close to the cultural circles involved with the Päivälehti newspaper. Eero Erkko’s son Eljas described Eemil Halonen as his father’s artist friend.

Contemporaries recall editor-in-chief Eero Erkko as an unassuming and quiet man who was also determined and strong. According to a contemporary account the figure of the young man sitting on a stump in Eemil Halonen’s sculpture as a positive figure with a bright gaze and a calm yet determined expression in his pure features. The right hand of the figure is resting against the raised right knee and the young man is freeing a young bird from his palm to take flight.

Freedom of Thought (also known as To Freedom or To Brightness) by Eemil Halonen is clearly and strongly symbolic. In this piece, the sculptor created a metaphor for both the character of Eero Erkko and the peaceful struggle for independence of the Finns. The bird is an ambiguous symbol. The bird of the soul, for example, is often present in traditional funerary art. Another perspective on birds is suggested by the author Maila Talvio in her book from 1927 Jumalan puistot – Leposijoja ja hautuumaita (God’s Parks – Resting Places and Cemeteries): ‘Remembrance at burial mounds is like a bird taking flight into the blue sky’.

A third interpretation of the bird symbol is associated with the life’s work of Eero Erkko. A small, orphaned chick represents man’s world of ideas. Letting it fly away means to give freedom to the idea. At its most concrete, the bird can even be associated with the ‘sparrows’ of the Young Finns who campaigned for social reforms. At the unveiling of the grave monument at Hietaniemi cemetery on 18 May 1929, Eljas Erkko interpreted his father ideological position as follows:

He was inspired by the ideology of liberalism, a man who regarded as his life’s work not only to fight for the liberation of his country but also, if it depended on him, to liberate its citizens, politically, socially and intellectually. In his mind, he always cherished this idea of freedom like one looks after an orphaned bird that needs care and security so that its wings may grow and that it can enjoy its freedom. Before his death, he could see how the wings of this bird of liberty began to grow stronger to allow it to take its first flights in freedom. (Helsingin Sanomat, 19 May 1929)

The funerary monument as a whole is a simple and monumental entity. ‘There is nothing bombastically grandiloquent or appealing to external means of dazzling its viewers. Instead, everything humbly serves an artistically considered overall impression and soulfully interpreted symbolism’, noted art historian Edvard Richter (1880–1956), the leading art critic of the Helsingin Sanomat newspaper in his review of the newly unveiled monument. The grave is surrounded on three sides by red granite polished to a shiny finish. The idealized figure of a youth faces south, towards the day and light. Eemil Halonen’s brother Arttu cast the approximately 1.2-metre-high sculpture at his foundry in Lapinlahti. 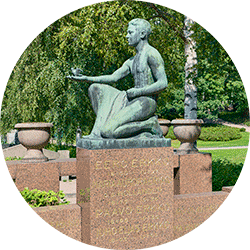 Editor, cabinet minister and member of the Finnish Parliament Eero Erkko was an important and influential figure in the last decades of the autonomous Grand Duchy of Finland in the Russian Empire and during the early years of national independence after 1917. He was one of the founders of the Päivälehti newspaper (later known as Helsingin Sanomat) and its first editor-in-chief.

During the first period of Russification policies known as the ‘years of oppression’ (1899 –1905), the Päivälehti newspaper was particularly singled out by Governor-General Bobrikov. Eero Erkko, who led the underground resistance movement known as the Kagal, was dismissed from his post as the editor-in-chief of the newspaper and exiled in 1903. After his return to Finland, Eero Erkko became in 1908 the editor-in-chief of the Helsingin Sanomat newspaper, serving in this capacity until his death. He also acquired the majority of the newspaper company’s shares.

In the political dispute over the Finnish constitution, Eero Erkko was in favour of a republic. Alongside his newspaper work, Erkko was active in the liberal National Progress Party and was a minister in three governments from 1918 to 1920.