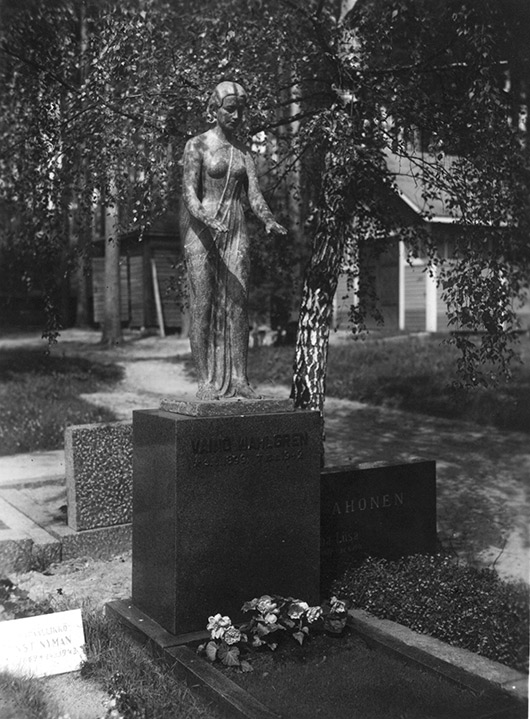 Eemil Halonen 1942
The Cemetery of the City of Jyväskylä

The bronze sculpture Siunaus (Benediction) by Eemil Halonen is on the family grave of Väinö Wallgrén and his wife Märtha (née Grönberg). For the Wallgrén family, Halonen was a natural choice for making the funerary statue. He was well-known in Viipuri and local pro-Finnish merchants and businessmen had commissioned many portraits, fountains, façade decorations and funerary sculptures from him.

In Siunaus (Benediction), a young female figure partly dressed in drapery is standing with her hands in a gesture of benediction, looking gently down as if blessing those who are resting in the grave. The bronze sculpture was made in 1942, during the war.

Väinö Wahlgren (1899–1942), who was born in Joensuu in East Finland, was one of Finland’s first clothing manufacturers. Together with his elder brother Yrjö, he bought a mechanized clothing factory from B. Scheinin, a merchant in Viipuri in 1924. Scheinin’s factory was the largest in its field in Karelia.

The Wahlgren brothers had experience of the clothing industry since 1911, when Yrjö established his first firm. In Viipuri, Väinö Wahlgren concentrated on the management of the factory. In the mid-1920s, the brothers had stores in Joensuu, Lieksa, Savonlinna, Viipuri and Sortavala, where the firm had its head office.

Väinö Wahlgren gave up his share of the factory and established the Karjalan Puku clothing firm in 1929. In the early 1930s, the company acquired new premises of over 1,000 square metres in the centre of Viipuri. The company made men’s suits and outerwear for men and women.

The factory operated according to the completely new and rationalized Taylor system. Whereas one person used to make a whole suit, the work was now divided among tens of workers as simple mechanized tasks. A men’s suit could be made in only ten minutes at the factory. The newspaper Laatokka wrote on 1 May 1930: ‘All kinds of machines there are carrying out, with unerring precision, even complex tailoring work, which had previously been done by hand, requiring many times more costly time’. By the end of the year Karjalan Puku had 170 employees, most of them women.

During the Finnish-Soviet Winter War (1939 –1940), the Wahlgrens were evacuated to Kauhajoki in West Finland, from where they moved to Jyväskylä at the beginning of the Continuation War (1941 –1944). Väinö Wahlgrén died in January 1942. In his will, he bequeathed 100,000 Finnish marks to the City of Viipuri and 100,000 marks to a Karelian association of war veterans.

Väinö Wahlgren’s eldest son, Väinö B. Wahlgrén (1922–1994) continued his father’s work as managing director of the Karjalan Puku firm. The company became one of the leading firms of Central Finland – and one of the best-known enterprises in the Finnish clothing industry.

The Cemetery of the City of Jyväskylä
Puistokatu 20, 40200 Jyväskylä