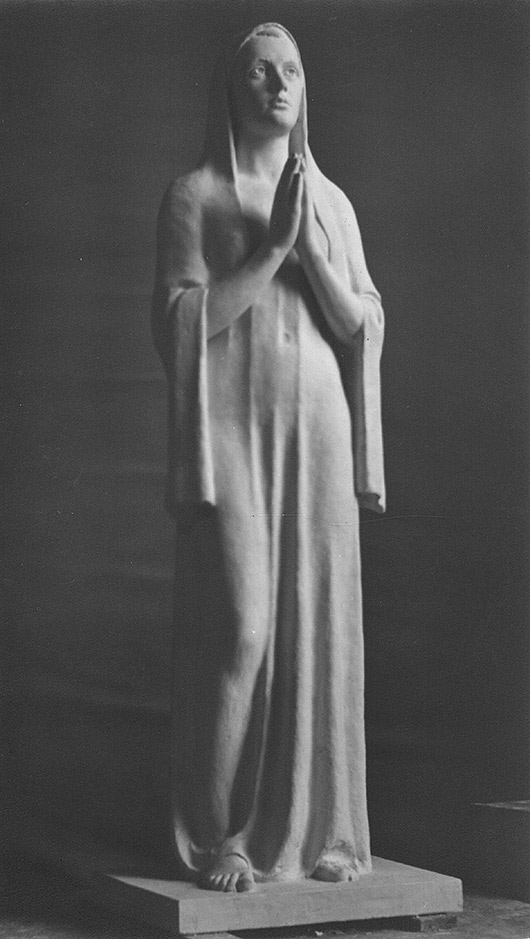 Eemil Halonen’s sculpture Rukous (Prayer) on the grave of forester Yrjö Rainio was completed in 1942, during the Finnish-Soviet Continuation War (1941 –1944). Placed on the gravestone, the piece depicts a woman wearing a veil standing with her hands joined in prayer and with her gaze lifted upward.  Attached to the gravestone is a bronze relief of Yrjö Rainio. The sculpture was cast at the casting works of Arttu Halonen, the artist’s brother, in Lapinlahti. 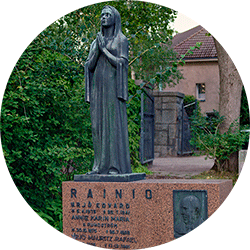 Forester Yrjö Edvard Rainio (originally Grönroos, 1875–1941) was born in the Parish of Lappee in the Province of Viipuri. His father, estate owner and agricultural counsellor Edvard Grönroos served as a ploughing consultant of the Province of Viipuri, teaching farmers the use of turn-ploughs, among other subjects. The family later moved to Heinjoki, where Edvard Grönroos purchased the large Pilppula property.

The pro-Finnish Edvard Grönroos was an prominent and influential figure in municipal politics and represented the Estate of the Peasants in the Diet of 1888. He campaigned for the founding of a school of crafts and home industries in Lappee, where also Eemil Halonen studied to become a carpenter.

Yrjö Rainio matriculated from the Tampereen reaalilyseo high school in 1895, after which he studied a variety of administrative subjects, agriculture and forestry. He went on to complete the so-called higher administrative degree at the University of Helsinki in 1899, a leaving certificate from the Evo School of Forestry in 1902, and graduated as agronomist from the Mustiala Farming and Dairy Institute in the following year. Rainio also completed the degree of Master of Philosophy in 1907. He went on study trips to Sweden, Denmark, Germany and France.

Rainio began his professional career working as a forestry administration official, a inspector of residences for civil servants and as a forester. He was the head of the Evo forest warden school in 1908 and a forester with the Land Use Department of the National Board of Forestry for almost thirty years from 1909 until 1937, when he became ill. His other duties included serving as secretary of the Committee for Agriculture of the Finnish Parliament in 1910 and 1911 and as secretary of the Parliamentary Finance Committee in 1912.

Rainio actively lectured and wrote about topics concerning agriculture and forestry. He published a study on the German practice of cultivation on sphagnum bogs, which became a manual for Finnish bog and mire cultivation. Rainio’s publications addressed, among other topics, needle cast disease  in conifers, the effects of lightning on timber in forests and the sale of timber. He also wrote a historical overview of forestry conditions in the Province of Viipuri in the period from 1811 to 1911.

Yrjö Rainio was also involved in charitable work and was active in the Mannerheim League for Child Welfare. In 1912, he established the Huhtiniemi rest home in the village of Ihalainen in Lappee, the region where he was born, and in the following year an orphanage together with his father. Rainio was active in local politics, serving as the chairman of the council of the Lauttasaari municipality, now part of Helsinki, from 1925 to 1928, and as vice-chairman of the Huopalahti municipal council from 1929 to 1930. Huopalahti was also incorporated later with Helsinki.