Memorials of the War of Liberty of 1918

During the Finnish Civil War of 1918, fought between the Whites and the Reds and also called  the War of Liberation by the winning side, military graves began to be established in the home congregations of the fallen who had fought on the side of the Whites. The town of Iisalmi, for example, provided a site in a central location on the shore of the River Paloisvirta and Lake Paloisjärvi  ’for the heroes who gave their lives for the lawful social order and national independence’.

Military funerals became important civic celebrations. Burial bells were rung, flags were flown at half mast and shops were closed during the funerals. Churches were decorated with spruce branches, flowers and wreaths of juniper. The coffins were borne to the altar to the tune of Chopin’s Funeral March.

After the funeral service and laying of wreaths the funeral cortege moved on to the graves along a route flanked by a guard of honour. And salutes were fired as the fighters for liberty were laid to rest.

The freedom fighters’ sacrifice for the fatherland

Grieving shared in the community fostered a patriotic spirit and the military ceremonies reinforced the power and hegemony of the White side. The White forces of the Finnish Senate were engaged in a war of liberty, fighting for the independence of Finland against internal and external enemies.

The first military funeral in the Iisalmi region was held at Lapinlahti on Palm Sunday, 24 March 1918. Nineteen-year-old shop assistant Reino Puurunen had been killed in the fighting at Ikaalinen. Dean Markkula comforted the assembled mourners by pointing to the importance of the sacrifice for the nation: ‘The work of a fighter for liberty is that of clearing, the results of which others will enjoy’. 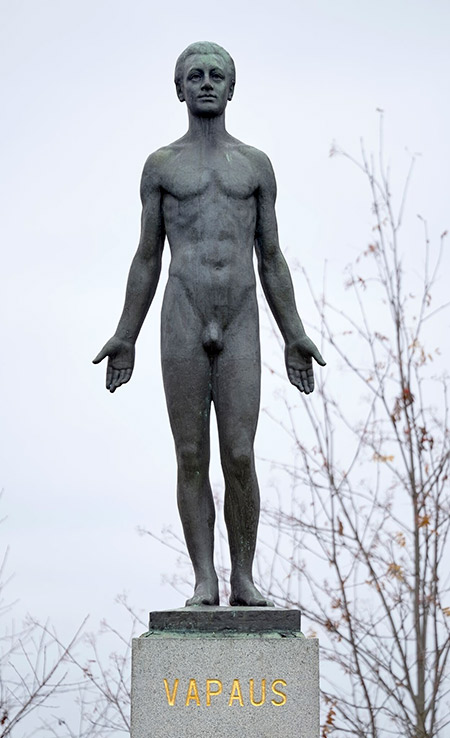 Employment for sculptors from War of Liberty statuary

During the First World War sculptors suffered from limited commissions and the high price of materials. Copper was needed more for the war industry than for casting works of art.

The situation changed after the Finnish Civil War. Statues honouring the heroes of the war also provided work for Eemil Halonen, who was ideologically strongly on the White side. He made four memorials of the War of Liberty, at Muuruvesi, Iisalmi, Kuopio and Hiitola. As far as is known,  a statue by him that was already unveiled in June 1919 is the first war memorial of independent Finland. The Civil Guards gathered funds for the memorial statues by holding public collections, memorial dinners, bazaars and evening entertainments.

The unveilings of the memorial statues were civic celebrations of White Finland. These patriotic events began with a parade of Civil Guards and Boy Scouts. Audiences of up to thousands of people dressed in their Sunday best would assemble on these auspicious occasions.

In Iisalmi, Cape Molerusniemi was renamed Sankariniemi (Hero Cape) when the memorial of the War of Liberty was unveiled there on 5 September 1920. The ceremonial gate to the site was decorated with garlands, Finnish flags and coats of arms. Boy Scouts flanked the route to the statue and members of the Civil Guards formed a guard of honour.

The celebration was begun with the hymn ‘A Mighty Fortress is Our God’ followed by speeches by representatives of the state, the church and local organizations. Bands, choirs and elocutionists performed. The national anthem was sung after the wreaths were laid.

The Liberty monument in Iisalmi

The names of eleven men of Iisalmi who had fallen in the War of Liberty as well as two who had died in Kemi in White Sea Karelia and had been buried in absentia at Sankariniemi are listed on the high column of the statue. The fourteenth name is that of 19-year-old Armas Lyytikäinen, who fell in a skirmish fought in Simo on 11 December 1916.

Armas Lyytikäinen had been on his way to Germany to receive military training as a Jaeger. The skirmish in Simo was the first armed conflict fought on Finnish soil between Finns and Russians for over a century. It has even been regarded as the beginning of Finland’s struggle for independence.

The Liberty statue depicts a young man’s internal calling to give his life for his country. It was cast in bronze by the artist’s brother Arttu Halonen. The stand is of local granite from Paloisvuori. The statue is over two metres high and the total height of the work with the stand and column is approximately five metres.

Halonen’s war memorials were not of a bellicose nature

The local newspaper Salmetar proudly wrote of its home town’s war memorial that it ‘is probably one of the most successful monuments of the same orientation in our country, one that makes the greatest impression and one of the loveliest ones’. Around the same time, the memorial statue Katkotut kahleet (Sundered Shackles) of grey granite was unveiled in Kuopio. Together with architect Armas Lindgren (1874–1929), Eemil Halonen had won the competition for design of the military cemetery in Kuopio a year earlier. Halonen was a forerunner in working in granite. The choice of a domestic rock type was also influenced by the strict budget of the clients.

The statues of the freedom fighters did not depict characters of the common people, who had still been an important element of the imagery of Finnish art at the turn of the century. Models for the heroes of freedom were now sought in the ideals of male strength, handsome appearance, courage and discipline. The model for the war hero statues of Kuopio and Iisalmi was the young actor Joel Rinne.

Eemil Halonen’s war memorial statues did not reflect a bellicose attitude. He observed later that the din and uproar of war was no longer needed at the grave. In Halonen’s theosophical world view, freedom appeared as the aim of human consciousness and the human spirit to be rid of the shackles of matter.

The granite Kahleet pois (Rid of Shackles) depicts a man who is breaking his last shackles to achieve freedom. In the Kuopio war memorial, a young muscular Finnish male of natural size has just broken his strong shackles and is about to step into liberty. On the one hand, the heroes breaking their shackles in Kuopio and Muuruvesi are ascending to a spiritual state of the soul and on the other hand they are breaking free from worldly oppression.

Rauhan kannel (The Kannel of Peace ) moved from Karelia to Noormarkku

The monument at the military graves in Hiitola was also known as the Kannel of Peace. The kantele (kannel) is a traditional Finnish stringed instrument resembling a zither. This exceptional female war memorial statue was unveiled on 6 December, Finnish independence day, 1920. Its idealistic nude female figure playing the kantele was moved during the Second World War from the Lake Ladoga region of Karelia to the churchyard of Noormarkku in Pori, where it serves as a memorial to the dead who remained in Karelia, which was ceded to the Soviet Union. The Kannel of Peace in the yard of the Vetreä care facility in Iisalmi is a cast of the above work made after the artist’s death.

Eemil Halonen prepared sketches for a war memorial statue in Lapinlahti, but he had his hands full with other commissions as well. Arttu Halonen wrote to him on 13 October 1919 asked whether Eemil, his brother, was ready to give the Lapinlahti piece to him. ‘I didn’t want to start doing it without discussing the matter first – and a job as small as that was not worth competing over.’

The war memorial statue in Lapinlahti was unveiled in September 1920. Designed by Arttu Halonen, it is a work of clear-cut lines sculpted in dark-reddish rock. It includes a relief of a young man in a bowed pose under which there is the inscription ‘The fatherland called us’ and on the sides of the statue the names of eight fallen White soldiers.

Those who died for their convictions

Before the Second World War, only the memory of the sacrifices of White Finland was cherished in a prominent and visible manner. The most important day in this connection was 16 May, marking the victory of the White side in the War of Liberation. Civil Guards would also swear their oaths of membership at the memorial statues. When General Mannerheim stayed at the Runni spa in Iisalmi in the summer of 1919, he visited the military cemetery of Kiuruvesi to lay a wreath.

In Iisalmi, those who fought on the Red side or had been killed in other connections in the civil war were buried in the cemetery of the so-called rural congregation of Iisalmi. A mass burial of the deceased was held on 20 November 1920, over two years after the war had ended.

The remembrance of those who died on the Red side gained official forms in 1940 after the Finnish-Soviet Winter War, when C. G. E. Mannerheim, now commander-in-chief of the Finnish Defence Forces, urged that the 19th of May should be celebrated for the first time as the day of remembrance of all the war dead of Finland. In 1945, an unassuming granite memorial was erected at the cemetery of the Iisalmi rural congregation dedicated ’to the memory of those who fell in 1918 loyal to their convictions’. By that time, the political atmosphere was different. Organizations of the labour movement in Kiuruvesi erected a memorial to three victims in 1979, with the text ’to the memory of the comrades who gave their lives on behalf of the working class in 1918’. 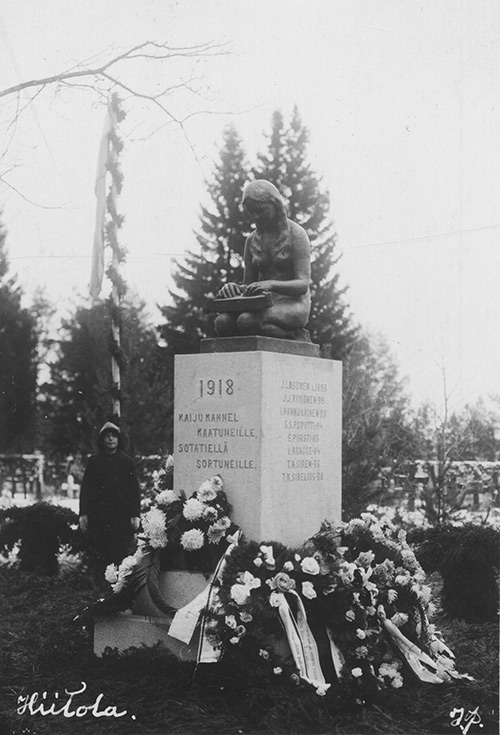 This page is also available in: Suomi